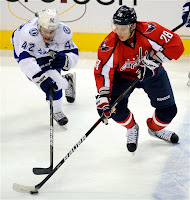 Alexander Semin
Theme: “Can you imagine what I would do if I could do all I can?”
--Sun Tzu

(click pic for larger image)
In five seasons he played since the lockout before this season, Alexander Semin scored goals at a rate of 40 per 82 games played. Of the 166 goals he scored in those five seasons, 49 of them were power play goals; 25 of them were game-winners. He even had three shorthanded goals. He had six hat tricks, four of them coming last season. Remarkably, only three of his 166 goals scored in these five seasons were of the empty net variety. Alexander Semin might be in the top-five in the entire league as a pure goal scorer.

So what was up with this season?

The 21 goals with which Alexander Semin finished the 2011-2012 season represented his lowest total for a full season in his seven-year career (he had 10 in 52 games in his rookie season of 2003-2004). It was not as if he was fighting through obvious injury. He had two short stints on the bench this season – one for an arm injury, the other for a shoulder injury.

It was not as if he had one prolonged slump that sabotaged his season. If you look at his ten-game segments, only once did he score at that “40-goal” pace that had characterized his post-lockout performance to date (the fourth segment in which he had five goals in nine games).

What was happening was he was falling off in accuracy. In the five seasons preceding this one, Semin was reliable in his shooting percentage, finishing his seasons in a tight range of 14.1 to 15.6 percent (14.8 percent average over the five seasons). But in 2011-2012 Semin finished at 11.5 percent. Couple that with the fact that his 183 shots on goal was his lowest total for a season for the lockout, and you get 21 goals.

This season, Semin had five goals in his first 27 games. It is worth noting that all five of them came while Bruce Boudreau was still behind the bench. Semin stumbled out of the gate when Dale Hunter took over, going without a goal over his first six games under the new coach. But he did rebound to a point. His 16 goals in his last 50 games was an improvement, but a 26-goal pace over 82 games was a far cry from his production over the previous five seasons.

Looking at Semin’s underlying numbers, you scratch your head a little harder. Among Capital forwards playing at 5-on-5 and in a minimum of 20 games, Semin was third in raw Corsi value (tops among top-six forwards), fifth in on-ice save percentage, sixth in PDO (second among top-six forwards to Marcus Johansson), sixth in offensive zone starts, and he was in the lower half in quality of competition faced. These numbers juxtaposed against his production suggests he was too often a passenger at 5-on-5.

And then there is this frustrating slice of information. It will come as no surprise that Semin led the team in penalties taken per 60 minutes at 5-on-5 (actually, tied with Jay Beagle). He led the team in 2010-2011. He tied for the team lead in 2009-2010. Here is how other numbers compare, this year to last: 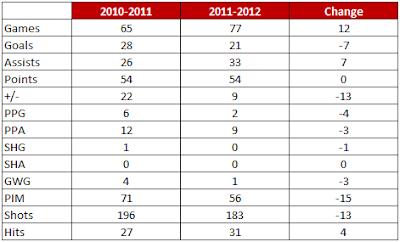 Odd Semin Fact… Semin had three goals in four regular season games against the Rangers, none in seven games of the second round of the playoffs.

Game to Remember... December 28, 2011. The Capitals were coming off three losses in four games when they hosted the New York Rangers in late December. The Rangers, on the other hand, were on a five-game winning streak. The Caps and Rangers exchanged goals in the first period, and Troy Brouwer gave the Caps a lead in the second. Then, Semin put an end to the competitive portion of the contest. He scored just 2:38 after the Brouwer goal when Nicklas Backstrom fed him at the Ranger blue line on a breakaway to give the Caps a 3-1 lead. He iced it with 2:35 left in the game when he converted a cross-ice feed from Alex Ovechkin and wristed the puck under the crossbar for a 4-1 lead that would be the final score. It would be his only multi-goal game of the season.

Game to Forget… November 11, 2011. Coming off a pair of ugly losses (a 5-3 loss to the Islanders and a 5-2 thumping by the Dallas Stars) the Caps were hosting the Devils on Veterans Day. Alexander Semin put the Caps in a bind early, taking an offensive zone hooking penalty 10:49 into the game. The Devils would not convert on the power play, but they would score just 17 seconds after the penalty expired, Semin among the Capitals on-ice for the score. It wasn’t as if he was all that engaged in the offensive end, either. He would record no shot attempts on any of his first 11 shifts of the game. And 11 shifts was all he would get. Bruce Boudreau benched him for the final 24:19 of what would be a 3-1 comeback win for the Caps.

Post-Season… In what has become a recurring theme in Semin’s career, he had a good first round (three goals in the seven-game series against the Boston Bruins) and a poor second round (one point – an assist – against the Rangers). It looked a lot like last season’s (3-1-4 in a five-game first round, 1-1-2 in a four-game sweep in the second). Or 2009 (five goals in the first round, none in the second). In the three seasons in which he participated in two playoff rounds, Semin is 11-4-15, plus-6 in 19 first round games, 1-8-9, minus-9 in 18 second round games.

In the end… Same ol’, same ol’. Alexander Semin is one of the most gifted talents in the league. He can – and has – put up big numbers from time to time during the regular season. But he fades at inopportune times, most notably in the playoffs as the Caps advance. There are times when he laps the field in terms of his ability to dominate play with a variety of skills – stickhandling, passing, shooting. And he remains an underrated defensive player. But those sublime occurrences do not happen frequently enough or last long enough. He is a fantasy player’s dream. But he is not the force he can be or needs to be often enough when the stakes are higher on the ice.  We are left once more to imagine what he would do when he could do all he can.

Email ThisBlogThis!Share to TwitterShare to FacebookShare to Pinterest
Labels: 2011-2012 BY THE TENS, Alexander Semin, NHL, the peerless prognosticator, Washington Capitals