(click pic for larger image)
As the 2011-2012 season approached, Mathieu Perreault was approaching a crossroads. At the age of 23 he already demonstrated a scoring touch in Canadian junior hockey – a pair of 110-point seasons. He also displayed an ability to score in the AHL with 135 points in 167 games over three seasons at Hershey.

However, in two partial seasons with the Capitals Perreault showed an ability to score when called up, but faded as his stint lengthened. As training camp approached, questions remained as to his sturdiness to withstand the physical grind of the NHL and his ability to sustain a level of production expected of a scoring forward. Put another way, he was entering that realm of being considered a fine AHL player, but not quite having what it takes to take that talent to the next level.

Perreault had a fine pre-season, going 3-2-5, and cementing a place on the opening night roster. Getting off to a good start did not hurt, either. He played in five of the first seven games of the season and was 3-2-5, plus-6. But Caps fans have seen this movie before, too. A hot start followed by a decline in production. That is just what happened. After his five-game start, Perreault was in and out of the lineup, playing in only 18 of the next 27 games and going 0-2-2, minus-7 in the process. At the end of that stretch of games he went out of the lineup with an upper-body injury and missed four games.

He returned to the lineup on January 7th, but it was a return to more of the same. Playing in five of the next eight games, he was 1-0-1, plus-1. He was not making much of an impression. He had played in only 28 games of 46 games through January 20th and was 4-4-8, even.

Sometimes, though, things change and for reasons you cannot see at the time. Change for Mathieu Perreault in this season came in a 4-3 overtime loss to the Pittsburgh Penguins on January 22nd. In that game Perreault recorded two assists – three months to the day since his last multi-point game – and was a plus-2 with two hits. From that game forward Perreault would get a sweater in each of the remaining 36 games of the regular season and would go 12-10-22, plus-9 in the process, an 82-game pace of 27-23-50, plus-21.

The summary statistic that jumps off the page when considering Perreault is his shooting percentage. He converted 16 of 60 shots taken for the season – a 26.7 percent efficiency rate that easily would have topped the league (Curtis Glencross had a 23.6 percent mark), had Perreault enough shots to qualify. But averaging less than a shot per game (60 shots on goal in 64 games played), he did not. And that is a somewhat surprising result given that Perreault’s raw Corsi value(a function of shots directed on net, for and against) at 5-on-5 is best among all Capital forwards.

Speaking of underlying numbers, that shooting percentage went a long way toward finishing the season with the fourth best PDO value at 5-on-5 among the 15 Capital forwards playing at least 20 games (the team shooting percentage portion of that value was 11.27 percent, tops in the forward group). Conversely, however, the on-ice save percentage portion of that PDO value was, well, not as good. At .909, Perreault’s value was 13th among 15 Capital forwards.

Fortunately, Perreault enjoyed the third highest share of offensive zone starts among these forwards at 5-on-5 and improved on that with an even higher share of offensive zone finishes, finishing tied with Nicklas Backstrom for second among these forwards (a +0.2 percent change over zone starts). Then again, only Mike Knuble and Cody Eakin skated against lesser competition than did Perreault, and only Jason Chimera skated with a higher quality of teammates. Perreault was the beneficiary of advantageous management. Here is how his numbers compare with last season: 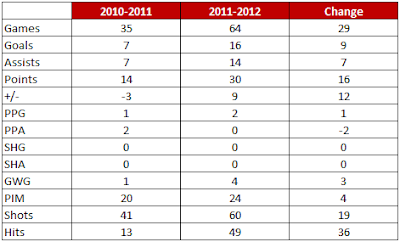 Odd Perreault Fact… Mathieu Perreault has scored 27 goals on 128 shots in his brief career (and has improved his shooting percentage in each of his three seasons). It took Alex Ovechkin 202 shots for him to reach the 27-goal mark for his career.

Game to Remember… January 24, 2012. No Nicklas Backstrom. No Alex Ovechkin. The defending Stanley Cup champion Boston Bruins are coming to town riding a 31-14-2 record. Hopeless, right? And it didn’t start well when Rich Peverley opened the scoring late in the first period. The Caps got even with a goal by Cody Eakin 2:14 into the second period. Then, it was The Mathieu Perreault Show. First, Perreault scored 41 seconds after Eakin’s goal to give the Caps a 2-1 lead. After Tyler Seguin tied the game once more mid-way through the period, Perreault scored 2:02 later. Brad Marchand scored for the Bruins to get the teams even a third time late in the second period, but Perreault took back the lead 7:18 into the final frame for his first hat trick and his first three-point game of his career. Dennis Wideman added an empty-net goal to complete the Caps’ 5-3 win.

Game to Forget… November 5, 2011. Things started well for the Caps on their visit to Long Island – they took a 2-0 lead on the New York Islanders into the first intermission. Unfortunately for the Caps there was a second period. The Islanders scored two goals of their own to tie the game at the second intermission. The hosts took the lead 6:28 into the third period for their third unanswered goal. The three goals were scored by three different players, and six different Islanders shared in the points. But Mathieu Perreault saw them all up close and personal from his perch on the ice. The Islanders would go on to win, 5-3.

Post-Season… It did not last long for Mathieu Perreault, who managed to play in only Games 1-4 of the opening round series against Boston, recording a total of only 42:50 in ice time. Even with that meager level of participation, he had a total of only one shot on goal. Was he injured? Pushed back on the depth chart? It was a mystery. One thing is for sure, the Caps could have used his ability to make something out of few shots on goal.

In the end… It is hard to find fault with Perreault’s success on the offensive side of the ledger this season. Getting 16 goals out of him – tied for fifth on the team – had to qualify as one of, if not the most pleasant surprise of the regular season. He even tried, at least on occasion (and with limited success) to add a physical dimension. He had 49 hits in 64 games (approximately equal to the frequency with which Marcus Johansson recorded hits). And he was not an entirely incompetent defensive player. With 31 goals scored against the Caps with Perreault on ice, the 0.48 goals against per game was better than Nicklas Backstrom, better than Jason Chimera, better than Brooks Laich, although once again, Perreault did not suffer having to play against top-flight competition. All in all, though, the patience the club had with him as he climbed through the system was rewarded, at least for this season. If provides a sense of hope for what comes next season.

Email ThisBlogThis!Share to TwitterShare to FacebookShare to Pinterest
Labels: 2011-2012 BY THE TENS, Mathieu Perreault, NHL, the peerless prognosticator, Washington Capitals