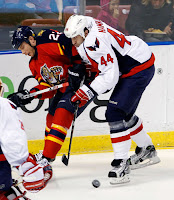 Theme: “Character is the impulse reined down into steady continuance.”
-- Charles Henry Parkhurst

No active NHL player has appeared in more career games than Roman Hamrlik. Were he to play in all 82 games this season he would climb into the top-20 all-time in games played. At the moment he stands at 1,379 regular season games played. He does not have a Stanley Cup.*  One might think that a player who in 19 seasons has not played for a Stanley Cup champion has toiled for by and large awful teams. Not so, Hamrlik.

Oh, there have been a few. The 54-loss team he played for in Tampa in his rookie season qualifies, but that might be expected given that the 1992-1993 season was the Lightning’s inaugural season (and they took Hamrlik with their very first franchise pick, first overall in the 1992 draft).

The 2000-2001 New York Islanders team would qualify, too. That team finished with 51 losses – last in standings points in the league. But that was Hamrlik’s first year on Long Island and merely the latest in a string of poor seasons for the Islanders – their fifth in seven seasons in which they failed to reach 60 standings points (even extrapolating their results from the shortened 1994-1995 season wouldn’t have gotten them to 60). In Hamrlik’s second season the Islanders jumped to 96 points for the season – eighth best in the league.

Looking at his whole body of work, Hamrlik’s teams have a combined record of 675-646-117-89 over his 19 seasons. He spent his first five and a half seasons in Tampa with the Lightning, being a part of the growing pains of that new franchise. He was a combined minus-124 in 377 games with Tampa. Since then he is a combined plus-79 in 1,002 games and was a minus player in only two of his last 13 and a half seasons. In 19 seasons he has had only one in which he recorded fewer than 20 points, that being last season with the Caps when he finished 2-11-13 in 68 games.

Even his season with the Caps last year was an example of regressing to the steady, reliable play the characterizes his career. In his first 27 games he struggled, going 1-0-1, minus-10. But over his last 47 games he was 1-11-12, plus-21 (a 2-19-21, plus-37 pace over 82 games). Hamrlik caught a break in terms of the quality of competition he faced at 5-on-5 – 165th among 198 defensemen playing in at least 40 games – but given that he also finished 147th among that same group of defensemen in offensive zone starts, he performed rather well (numbers from behindthenet.ca). He demonstrated that he could be a solid second pair partner.

Hamrlik stepped up against stiffer competition last season. Against teams that would make the playoffs out of the Eastern Conference he was 1-6-7, plus-6. Then, in the post-season, he was second in overall scoring among Capitals defensemen (1-3-4 in 14 games) and led the team with a plus-8. Only Karl Alzner logged more even-strength ice time in the post season than did Hamrlik, and he was on ice for only eight of the 30 goals allowed by the Caps (only five of the 24 at even strength). John Carlson and Karl Alzner get more attention as the closest thing the Caps have to a shut-down defensive pair, but Hamrlik was quite effective in a steady, understated way.

There is only one defenseman currently under contract in the NHL who is older than Roman Hamrlik (Adrian Aucoin). In the last 25 seasons only 26 defensemen have played in 50 or more games in a season at age 38 or older (some of them did it multiple times). Only 18 played 65 or more games in a season. You have to wonder how much Hamrlik will have in the tank.

The Big Question… Does Roman Hamrlik get second-pair minutes with the Caps?

Karl Alzner and John Carlson are likely to get the most minutes as a pair for this club. Last year, each of them averaged about 18 minutes of even-strength ice time per game. Mike Green would appear likely to get almost as many minutes (he averaged 17 even strength minutes a night in his 32 games). Who gets the minutes on the other side of that second pairing is something of an open question. Dennis Wideman took his 18:41 of even strength ice time that he averaged last season to Calgary, and Dmitry Orlov might not be ready to assume than much of a load. It would be hard to think that anyone but Hamrlik would be paired with Green on the second pair to start the season (hey, humor us about that). Whether Hamrlik will have enough to be on that pair in the spring is another matter.

Except for that 27-game stretch to open the season last year, Roman Hamrlik has been a remarkable steady performer over his 19 seasons. He does not put up big numbers, but he does put up consistent numbers. He is no longer the scorer who put up 40 or more points in six of his first 11 seasons, but he could be a decent bet to put up something in the 20 point neighborhood. Doing so would depend on his playing 65-plus games. And while Cheerless has a point about age and defensemen in the NHL, the fact is that Hamrlik played fewer than 68 games (his total last season) only once in his last 16 seasons. When you account for the abbreviated 1994-1995 season in which he played in all 48 games, he has only one season in which he has played fewer than 64 games. Durability has not been an issue. That will be the thing to watch as the season unfolds. If he dressed as consistently as he has over 19 seasons, that “steady continuance” is almost sure to follow.


* Nine players have appeared in more games and not won a Cup, four of them also having been Capitals at some point in their careers: Phil Housley, Mike Gartner, Dale Hunter, and Doug Mohns).