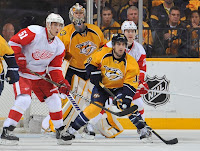 Theme: “Time is a circus, always packing up and moving away.”
-- Ben Hecht

Defenseman Jack Hillen put together a fine four-year career at Colorado College, topping it off with being named Defensive Player of the Year and a first team all-star in the Western Collegiate Hockey Association in addition to being named as an All-American. After finishing up his college career in 2008, a season in which he was 6-31-37 in 41 games, he found himself undrafted by any NHL team. He signed with the New York Islanders as a free agent after completing his NCAA eligibility and dressed for two games in his first taste of NHL action.

Hillen would play in 175 games for the Islanders over four seasons averaging almost 19 minutes a game in his appearances. In his last season with the Islanders he suffered a concussion and a shoulder injury that caused him to miss 11 games. He would not be extended a qualifying offer by the Islanders and was picked up by the Nashville Predators on a one-year deal.

He dressed for 55 games for the Predators in 2011-2012, recording a pair of goals and six points. But once more he found himself without having an offer extended to him. Enter the Washington Capitals, who signed Hillen to a one year deal at the same pay as under his Nashville contract -- $650,000.

It is an odd circumstance his being signed by the Capitals. Coming to Washington reunites Hillen with Joey Crabb, a teammate for Hillen’s first two years at Colorado College. Then there is his unfortunate experience with Alex Ovechkin. In a visit to Long Island on January 26, 2010 – a 7-2 win over the New York Islanders – Ovechkin recorded ten shots on goal and four other attempts that were blocked. One of the shots that was blocked was done so by Hillen’s jaw. Despite the injury that left him bleeding on the ice Hillen managed to skate off under his own power, but he did miss nine games. Ovechkin did not score a goal in that game.

One can never have too many defensemen. The Caps have not dressed fewer than eight defensemen for a season in any year since the first lockout and have dressed as many as 13 in a season (2008-2009). Hiller might not be a sure bet as a top-six defenseman, but he will get minutes. Hillen is not a big defenseman (5’10”, 190), but has a reputation as a good skater. He might thrive under Adam Oates more than he might in other systems, given the expectation that Oates will put a premium on pressure and that as an assistant in New Jersey for two years he saw the likes of Andy Greene and Matt Taormina, defensemen of about the stature of Hillen.

Alzner, Carlson, Green, Hamrlik, Orlov, Schultz, Erskine…Hillen. Sure, it is likely that the Caps are going to dress something more than six defensemen this season (assuming that any dress at all), but an undersized guy who doesn’t provide much offense (199th among 297 defensemen in points) or physical play (187th of 297 defensemen in hits) is not likely to get a lot of minutes unless things go wrong. He was sixth in games played by the Predators last season, but you wonder if that was a product of Jonathan Blum and Ryan Ellis being on a yo-yo between Nashville and Milwaukee of the AHL, and Roman Josi missing 30 games to injury. Just remember, Hillen played in only two of Nashville’s ten playoff games and got less than eight minutes a game in them.

The Big Question… Can Hillen leap-frog into a top-six spot?

Hillen was a top-six defenseman on Islander teams that had modest aspirations and a lack of depth. In Nashville, his 55 games might have been more a product of circumstance. Certainly that seems to be the case given that the Predators chose to stick with younger options in the lower pairings than re-sign Hillen. The Caps have a more veteran group fighting for third pair spots (Jeff Schultz and John Erskine have 797 regular season games of experience between them to 230 for Hillen), which will make the contest difficult from Hillen’s perspective. If he has an advantage it might be that he could be a more mobile defenseman than either Schultz or Erskine and a better fit for Oates’ approach. But since both Oates and Hillen are unseen commodities in these parts so far, it makes for a fuzzy picture trying to look ahead.

Given the way the Capitals roster is currently set up, Hillen will get minutes. How many might be more a product of what happens around him than what he can do to make his own case. Injuries and slumps happen. Mike Green’s availability is no sure thing, and Dale Hunter cut back on Roman Hamrlik’s ice time when Hamrlik was around for too many scoring chances through the middle of last season. At age 26 (he will be 27 in January) he seems to have reached his niche in the NHL, a defenseman who is in that 6/7/8 twilight zone. It is a place that is important for depth purposes, but it is one that will always have him on the margin of regular employment in the NHL. And the Capitals being his third team in three years, whether Washington will be a destination or another stop on the journey is unclear.