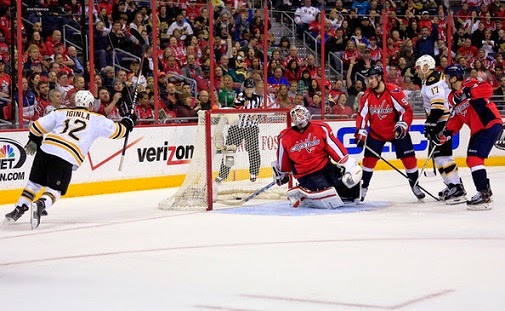 The ninth of our ten games that mattered to the Washington Capitals in the 2013-2014 season was the end of a brutal stretch of the schedule in which the Caps would play 11 of 13 games against teams that would qualify for the 2014 playoffs.  With the Capitals among four teams tied with 80 points occupying the 7th through 10th places in the conference, it was time to treat these games like playoff games.  Who better to do it against than a team steamrolling its way into the playoffs?

The Background:  When the sun came up on March 29th the Capitals were in eighth place in the Eastern Conference holding the last ticket to the Stanley Cup playoffs.  Holding on to that reservation on this day would be a formidable task.  For the third time in four weeks the Caps faced off against the Boston Bruins.  This would be the rubber match of that series, the Caps winning on March 1st and the Bruins winning on March 6th.  Washington came into this game having played in three consecutive Gimmicks, two losses to the Los Angeles Kings wrapped around a win in San Jose against the Sharks.  Boston was coming off their 50th win of the season, a 3-0 shutout of the defending champion Chicago Blackhawks.  Since the Bruins lost to the Caps on March 1st they were 13-0-1 heading into this contest.

Why It Mattered: One might have thought that the Caps caught a break when Boston head coach Claude Julien called on backup goaltender Chad Johnson to face the Caps.  Trouble was, Johnson had not lost a game in regulation in more than three months dating back to a 4-3 loss against the Ottawa Senators on December 28th when he allowed the winning goal in relief of starter Tuukka Rask.  Since then he was 10-0-1, 1.82, .934, with two shutouts in 13 appearances.

At the other end, Braden Holtby went into this game with a career record against the Bruins of 4-1-0, 2.13, .940.  This had the potential to be a goaltenders’ game.  It started that way, too.  Neither team found the back of the net in the first period, Johnson turning aside nine Washington shots, while Holtby stopped 15 Bruins’ shots.

Holtby cracked first, though, 2:48 into the second period.  The Bruins caught the Caps being out of position at the end of a Washington power play.  A slashing penalty to Carl Soderberg had just expired when David Krejci chopped the puck out of the Boston zone to center ice.  Karl Alzner could not settled the puck at the players’ bench, and the puck bounced onto the stick of Soderberg.  When Alzner’s partner John Carlson slid over to cover, Soderberg fed Jarome Iginla ceuising down the middle.  With Alzner and Carlson trapped on the same side of the ice, Iginla had a break.  Tom Wilson could not close the distance in time on the back check, and Iginla snapped the puck low over Holtby’s right pad to give the Bruins a 1-0 lead.

Soderberg got one of his own just under five minutes later on a power play when he redirected a Patrice Bergeron shot through Holtby’s pads.  Less than a minute after that it was Iginla once more.  It was Johnny Boychuk sending the puck up ice this time, trying to find Krejci in front of the Boston bench.  Krejci, who was tied up with John Erskine, managed to get a stick on the puck giving Iginla a chance to move it along.  Iginla fired a shot from the right wing faceoff dot that Holtby stopped, but Iginla followed up his own shot.  With Milan Lucic’ presence at the top of the crease preventing Holtby from diving on the loose puck in front of him, Iginla retrieved it and slipped it through Holtby’s pads to make it 3-0.  It was his 30th goal of the season making it 12 seasons he reached that mark and only the 12th player in the last 30 years to hit 30 goals having reached 36 year of age or older.

The Caps were not entirely out of it, though.  Late in the period Washington was cruising through the neutral zone in numbers.  Mike Green was skating on his off wing when he crossed the Boston blue line.  Boston looked to have the play covered, though.  Brad Marchand cut off Green’s angle down the wall, and Jason Chimera, who was filling in the middle, looked to be covered by Johnny Boychuk.  Green sent a pass to Chimera nonetheless, but it was Boychuk’s stick that redirected the puck into Johnson’s pads.  The goalie could not secure the puck, though, and it was loose just long enough for Chimera to nudge it the last few feet to make it 3-1 with ten seconds left in the period.

The Caps could get no closer in the third period.  Patrice Bergeron restored the Bruins’ three-goal lead 13 minutes into the period when he cleaned up an unsuccessful Carl Soderberg attempt off a rebound from a shot by Dougie Hamilton.  That pretty much ended the competitive portion of the game.  Evgeny Kuznetsov scored on a severely angled shot with 55 seconds left, but it was not enough as the Bruins skated off with a 4-2 win.

The Takeaway:  The Caps started the day in eighth place in the Eastern Conference, holding one of the eight post-season slots available.  At the end of the day the Caps were in 10th place and would not find themselves in the top eight again for the rest of the season.  For one Capital it might have been especially frustrating.  Alex Ovechkin went his 14th straight game without an even strength goal, a streak that would eventually reach 16 games.  And, in none of those 16 games was Ovechkin on the plus side of the ledger (minus-19 overall).

It was Ovechkin who captured this game and perhaps the season in the post-game...

"It seems like we [were] afraid to do something out there, afraid to create the play and we give them easy chances.  It's details. We knew they [are a] physical team but we have to take a hit and make a play. You can see we [were] not [a] desperate team in the first two periods. We can't play like that."

Too often this season, it seemed, the Caps played like that.

This would be the last game that Washington played against an Eastern Conference playoff team while the Caps were still in the race for a spot.  In those 28 games the Caps compiled a record of 13-13-2.  Four of the wins came via the Gimmick, as did one of the extra time losses.  The Caps found especially difficult sledding late.  In the 2014 portion of the season they went just 4-9-2 against those eight teams, and with the loss to Boston lost their last six contests against those playoff teams (0-5-1).

This game put a period on an uncomfortable truth about this team this season.  It was not luck, it was not injury, it was not sunspots that kept the Caps out of the playoffs.  They just were not good enough.  And that’s why this game mattered.