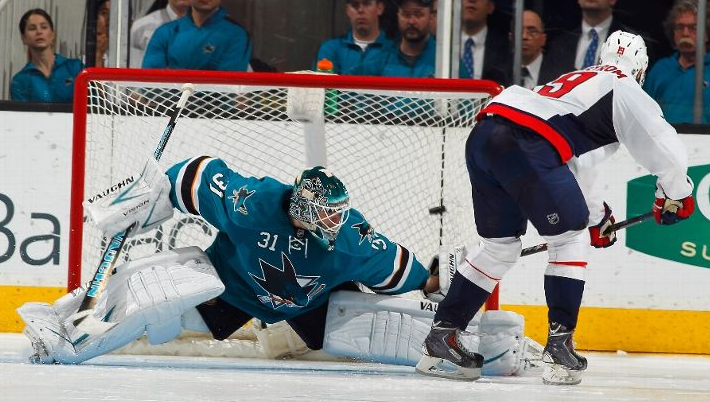 Game eight on our journey through the games that mattered in the Washington Capitals’ 2013-2014 season takes us to the other side of the continent, to a place where momentum went to die – often – if you were a Washington Capital.

The Background: If the Greek mythology figure Sisyphus had been a hockey fan, he would recognize the relationship between the Capitals and San Jose, California. Just like poor Sisyphus rolling that boulder up the hill, only to watch it roll back down every time, the Capitals flew to San Jose 12 times since winning there in October 1993, and 12 times they returned to D.C. without a win (0-11-1). All in all, it was 7,447 days that the Caps went without a win in San Jose. Getting one on the 7,448th day was not looking too promising, what with the Sharks having gone 12-3-1 since February 1st heading into their match with the Caps.

Why It Mattered: The teams spent the first three minutes feeling each other out, the Capitals recording the only shot on goal. The pace quickened shortly thereafter, though, with rapid bursts – four shots by the Caps in a 56 second span, three by San Jose in a 38 second span. And that was before the game was nine minutes old.

Both goalies held firm, but it would be Holtby’s sturdiness that was rewarded at the other end of the rink in the 12th minute of the period, thanks to some hard work and a nod from the hockey gods. Logan Couture tried to skate the puck out of harm’s way in the Sharks’ end but had the puck poked off his stick by Eric Fehr. Jason Chimera beat Couture to the loose puck and skated it below the San Jose goal line to the left of goalie Antti Niemi. Chimera fed the puck back out to the right wing circle for Fehr, and that’s when the hilarity started (well, it was funny to Caps fans).

Fehr leaned into a shot from the right wing faceoff dot that Niemi blocked with his right pad. However, the rebound was left in the low slot. Sharks defenseman Justin Braun got to the puck and tried to shoot it out of danger toward the left point and off the wall. What he did not count on was teammate Matt Nieto skating into the path Braun chose. Braun’s clearing attempt hit Nieto in the right leg and caromed toward the open net. If that wasn’t enough, it appeared that Braun nudged it further on its way as it was sailing through the air, essentially backhanding the puck into his own net. The gift was hardly compensation for all the grief the Caps took in this arena over the years, but it was accepted nonetheless.

This being a Caps game in San Jose, though, things could not go right forever. With just 15 seconds left in the period. Nieto and the Caps’ Jack Hillen were dueling over a puck bouncing toward the Caps’ blue line. Nieto spiked it into the corner to Holtby’s right where Mike Green recovered it. Green tried to spin and backhand the puck along the back wall to Hillen, but Nieto intercepted the weak pass. After circling from around the cage from Holtby’s left, Nieto took two whacks at the puck. Neither got past Holtby, but Holtby could not cover either attempt. The puck squirted out to Holtby’s right where Patrick Marleau banged it home with just 5.6 seconds left in the period.

After a scoreless middle frame it was San Jose’s turn to score first in a period. It started when Jason Chimera tried a shot from the right point. His attempt hit the shin pads of James Sheppard and rebounded out into the neutral zone. Sheppard jumped on the loose puck in the neutral zone and was off on a breakaway. Sheppard drew Holtby out to cover what looked to be a backhand attempt, but it was a fake. Sheppard slid the puck between Holtby’s pads along the ice, and the Sharks had a 2-1 lead five minutes into the period.

Any other time, that would have been it for the Caps in this building. But the Caps got a life from a most unexpected source. Tom Wilson started the play skating down the right wing and into the San Jose zone. Scott Hannan stood Wilson up just inside the blue line, but not before Wilson sent the puck in deep along the wall. Both men went for the puck behind the Sharks’ net, and Wilson annoyed Hannan enough for him to lose control of the puck to Dustin Penner. From behind the net to Niemi’s right, Penner sent the puck out to Chris Brown at the inside edge of the left wing circle. Brown’s shot pinballed off both Nieto and Dan Boyle before settling behind Niemi for the goal to tie the game 12:30 into the third period.

That would be all the scoring in the hockey portion of the game. After Logan Couture was denied in the first round of the Gimmick, Evgeny Kunzetsov got the Caps off to a good start in their half of the round with a laser of a snap shot over Niemi’s right pad. Holtby made that goal stand up with a save on Joe Pavelski in round two, but he was beaten by Marleau in the top of the third round. That left it up to Nicklas Backstrom in the bottom of round three. After an achingly slow walk up to the Sharks’ net, Backstrom deked Niemi to the ice and flicked a backhand past the goalie’s outstretched glove and the Caps had something they had not experienced in more than 20 years.

A win in San Jose.

The Takeaway: The win in San Jose was thrilling enough, but it capped what was the most successful California trip in team history. With a win over Anaheim and a trick shot loss to the Los Angeles Kings, the Caps went 2-0-1 on this trip. Never had the Caps won as many as five of six possible standings points on a three-game trip to California. It was an especially noteworthy achievement coming near the end of a brutal March schedule that had the Caps playing 11 games against what would be playoff teams out of 14 contests over a span of 28 days. Further, the Caps were doing it with defense and goaltending. On the three game California trip the Caps allowed only five goals, part of a stretch in which they allowed only 17 goals in eight games.

The “Death March” of a schedule in March saw the Caps finish 6-5-4.  It was not a bad record given the quality of competition the team faced.  The California trip, which loomed so large and inspired much trepidation in Capitals Nation, turned out to be the highlight of the month.  But even with that there was a catch.  The San Jose win was followed by five straight losses (0-3-2) that effectively put an end to the Capitals’ playoff hopes.  But in this moment, slaying the monster that was a 20-year losing streak, beating the San Jose Sharks mattered.