The Peerless Prognosticator is ON THE AIR!!! -- Game 62: Penguins at Capitals, March 1

The 2016 trading deadline is in the rear-view mirror, but the season goes on, and Tuesday night it picks up again for the Washington Capitals as they return home from a loss in Chicago to the Blackhawks on Sunday afternoon to host the Pittsburgh Penguins on Tuesday night.

As for the Penguins, they come into this game having alternated wins and losses over their last nine games (5-3-1).  Over that span they outscored their opponents by a 25-23 margin, three of their five wins coming by margins of three or more goals.

Caps fans might ask, “who is Scott Wilson?”  One answer might be “tied for the Penguins' team lead in goals over the last nine games.”  In fact, Wilson has goals in four of his last five games to achieve that lead, his only four goals this season.  In fact, they are his only four goals in 18 NHL games to date in his brief career.  Wilson was a seventh-round draft pick of the Penguins in 2011, and he while he had decent numbers at the University of Massachusetts-Lowell (30 goals in 109 games), they were not of the sort that suggested big NHL numbers down the road.  They he reached the AHL and found his goal-scoring touch.  In 89 games with the Wilkes-Barre/Scranton Penguins he had 41 goals.  His performance was rewarded to promotion to the big club – several of them.  His most recent recall (February 1st) was his sixth over the past two seasons.  He has never faced the Capitals.

Defenseman Kris Letang is the Penguin’s top point-producer over the last nine games (1-7-8) and is the league’s sixth highest scoring defenseman (10-36-46) despite playing in more than ten fewer games (50) than any of the five defenseman ahead of him (or any of the nine behind him, for that matter).  Letang is already closing in on scoring totals he reached last season.  He is within a goal (10) of last year’s total (11) and has 36 assists (43 last season).  He is on a pace to finish with his first career 50-assist season.  Letang is also a minutes eater, tied for fourth in the league in total games logging more than 25 minutes (40 so far).  Letang is 4-6-10, minus-14, in 24 career games against Washington. 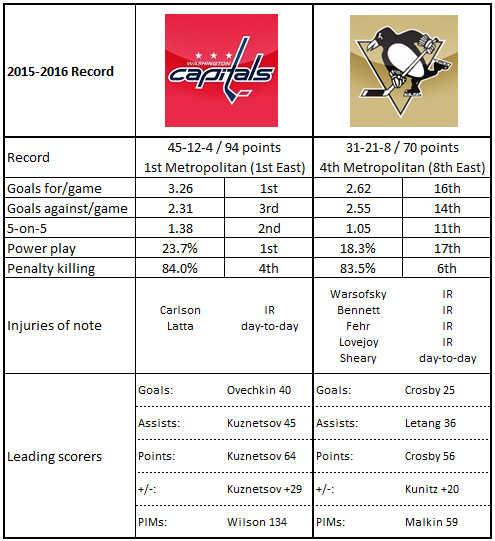 1.  What the Penguins do not have in their last nine games is a power play goal.  They are 0-for-17, a run that is as amazing for averaging fewer than two opportunities a game as it is for being shut out.  Five times in those nine games they were held to a single power play chance.

2.  Penguin penalty killers have not been overly burdened, either.  Pittsburgh has faced just 20 shorthanded situations over their last nine games, killing 17 of them (85.0 percent).

3.  The Penguins do not score first often, but they are successful when they do.  They have taken the first lead of a game 25 times in 60 games this season and have a 21-3-1 record.  Their .840 winning percentage in those games is third-best in the league.

4.  Only five teams have fewer power play goals on the road than the Penguins (13).

5.  Pittsburgh has the eighth-best Corsi-for at 5-on-5 overall on the road this season (50.9 percent).  They have a knack for applying offensive pressure in those situations, holding the fourth-best Corsi-for/60 minutes (55.5; numbers from war-on-ice.com)

1.  The Caps have gone 15 games without a multi-point win that did not involve an empty net goal (6-3 against Columbus on January 19th).

3.  The Capitals’ 107.7 special teams index (power play plus penalty killing percentages) is third best in the league and best in the Eastern Conference.  Anaheim (108.9) and St. Louis (107.8) rank ahead of the Caps league-wide.

4.  The Caps are still undefeated when taking a lead into the first intermission of games (18-0-0).  The last team to go a full season without losing a game in regulation when leading after the first period was the 2012-2013 New York Rangers (13-0-1).  The last team with a perfect record when leading after one period was the 1994-1995 St. Louis Blues, who went 15-0-0 in a lockout-shortened season.

Okay, so Sullivan is the head coach, but he has now been behind the Penguins’ bench for 32 games, and comparing his record to date to that of his predecessor, Mike Johnston, it is not all that different in terms of wins and losses.  Sullivan took over after Johnston’s Penguins started the season with a 15-10-3 record.  Sullivan’s Penguins are 16-11-5 since then.  Sullivan has opened things up considerably, but it has merely shifted performance toward more total goals, not a bigger goal differential for the Pens.  His club is averaging 2.84 goals per game compared to 2.36 under Johnston, but they are also allowing 2.75 goals per game compared to 2.32 under Johnston.  The power play is better (21.1 percent to 15.6 percent), but the penalty killing is a bit worse (82.8 percent to 84.2 percent).  When Sullivan took over, the Penguins were fifth in the Metropolitan Division and ninth in the Eastern Conference, one point out of a wild-card playoff spot.  As the Penguins head into Monday night’s game against Arizona, they are in fourth place in the Metropolitan Division, three points ahead of Philadelphia and New Jersey for the second wild card spot.

There are 327 players in the league who have recorded 75 or more shots on goal.  Of that group, Nicklas Backstrom ranks seventh in shooting percentage (17.3 percent).  The thing is, though, Backstrom is averaging his fewest shots per game (1.69) in his nine-year career.  He has only seven shots on goal in his last eight games, and he does not have a goal since he recorded one in a 5-2 loss to the Florida Panthers on February 2nd.  That is 13 straight games without a goal.  He remains one of the most consistent point producers in the game, only twice in nine seasons averaging less than 0.95 points per game (he is at 0.98 this season).  It is just that in the midst of a five game stretch in which he does not have more than one shot attempt at 5-on-5 (and only 21 in his last 14 games; numbers from war-on-ice.com), he does not seem to be looking at the net much at the moment.

For all the attention usually paid to the Penguins, they are have yet to put much space between themselves and their playoff pursuers since the coaching change in December or the recent resurgence of Sidney Crosby (19-18-37, plus-10, in his last 29 games).  They are a season-high ten games over .500, but they do not have the look of a sure playoff team.  At the other end of the rink, the Caps are in, what for them this season, a slump.  Having lost two of their last three games and not winning by more than one-goal (except for games with an empty net goal) in almost six weeks, the Caps do not look like the team that was marauding across the NHL landscape through mid-January.  It will be interesting to see which team can take advantage of the recent misfortunes of the other.