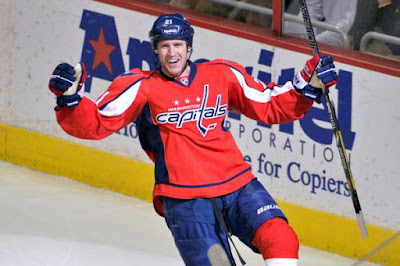 The "Rock the Red" generation of Washington Capitals fans have never known a team without Brooks Laich being a part of it.

Laich finished the Washington portion of his NHL career having appeared in 742 regular season games, eighth most in franchise history, and another 65 postseason contests, 13th in club history.  He is 19th on the Capitals’ all-time goal scoring list (133) and 22nd on the Caps’ all-time points list.

Laich came to Washington under what might have been difficult circumstances, arriving as a prospect in February 2004 along with a second round draft pick in a trade with the Ottawa Senators for Peter Bondra, the leading goal scorer in Capitals history and, along with Sergei Gonchar (who would be traded a few weeks later) and Brendan Witt, the last links to the Capitals’ only Stanley Cup finals appearance in 1998.

Laich moved up the development chain smartly, spending 90 games with the Portland Pirates in the AHL over two seasons before logging his first full season in the NHL in 2005-2006.  After that 2005-2006 season, with the Caps not qualifying for the postseason, Laich was returned to the Hershey Bears where he was a member of the 2006 Calder Cup champions.  It would be his farewell to the AHL.

Laich became a player who could play any forward position and in just about any circumstance.  Over a five-year period, from 2007-2008 through the 2011-2012 seasons, Laich totaled 101 goals, 38 of them on the power play, and 238 points, twice topping 50 points.  Over those five seasons he added nine playoff goals and 30 points in 51 playoff games.

Then, the 2012-2013 lockout took place, and perhaps no one would be more affected in his on-ice level of performance than Laich.  With the league on hiatus as they sorted out their labor differences, Laich signed with the Kloten Flyers in Switzerland.  He played in 19 games with the Flyers before returning to North America after sustaining an injury.

It was an injury that would permanently change Laich’s career trajectory.  After having missed only four regular season games over the previous five years, he appeared in only nine of 48 games in the abbreviated 2012-2013 season.  It was a frustrating period for Laich, who would appear in just 51 games the following season.  Despite repeated declarations that he was feeling well enough to play, it was clear that he was not the player he was before the lockout, and he eventually underwent surgery in March 2014 to repair his nagging groin injury.

He might have been surgically repaired, but his performance on the ice remained damaged.  He appeared in 66 games last season and managed just seven goals and 20 points, becoming largely a fourth-line player.  This season he had one goal and seven points in 60 games and was averaging barely ten minutes of ice time a night at the time of the trade.  Over parts of four seasons after he suffered his injury in Europe, Laich was just 17-29-46 in 186 games.

What he had become over the years, though, was a player who was very accommodating to the media, often quoted over the course of a season.   And, he authored one of the most memorable stories of an athlete doing good on the spur of the moment in the immediate aftermath of a playoff series loss.  A couple of Caps fans heading home after the series-clinching loss had a flat tire on the Roosevelt Bridge linking Washington and Arlington, VA.  They were waiting on a repair truck when...well, we’ll just let the Washington Post’s Dan Steinberg pick it up from there…

“Finally, an SUV slowed down ahead of them and pulled over. And then Brooks Laich got out and asked if he could help.

Since the AAA folks were already on the way, Mary Ann [Wangemann] asked Brooks -- whom she immediately recognized -- if he'd just wait with them by the side of the road. Instead, he asked whether they had a spare. Mary Ann said they did. So he took off his jacket -- he was still wearing his postgame suit -- got out the tire, and started jacking up the car.

‘He was like an angel, I'm telling you,’ Mary Ann told me. ‘Can't say enough nice things about him.’

The thing took a while, as late-night tire changes on the side of bridges often do. So they started talking hockey. Laich, who scored the team's only goal in Game 7, apologized to them for the Caps losing. They told him how great the season had been and how much they liked this team. Laich said he hoped they got a chance to stay together.

The jack fell down, and he had to start again. Lorraine stood behind him, mouthing to her mom over and over, ‘It's Brooks Laich! It's Brooks Laich!’ Laich was friendly but somber as he worked. Mary Ann -- who had never before cared about a sports team -- talked about why she liked this group so much, and how they seemed so nice off the ice.

And that might sum it up in a nutshell.  An athlete is not some hermetically sealed entity that gets unpacked a couple of hours before game time and resealed a couple of hours after the final horn to wait on the next contest.  They are part of the community, and their rise – and fall – in their professional life does not diminish the fact that they are part of the fabric of the community.  I never had the pleasure of meeting Brooks Laich, but he – like so many of his teammates – seems like a thoroughly decent fellow who happened to live his professional life here under a microscope, with all the cheers and jeers that such a life entails.

It can be hard as a fan to keep on-ice performance, the business aspects of the sport, and the personality of the players distinct.  So why do it?  It is entirely possible to entertain the concurrent notions that Brooks Laich is one of the good guys who had a tough break when he was in his prime as a member of the Caps.  He spent the last few seasons as a shell of the player he was in his best years here, but it didn’t make him any less worth rooting for.  If anything, at least to us, he became a more sympathetic figure as a hockey player precisely because he seemed like a decent fellow who was earnestly trying to recover and return to the level of performance he enjoyed a few years ago.

But sports being what it is, a sympathetic figure gets only so much consideration.  The club has a responsibility to its fans to do its best to compete for a championship, especially when this edition of the Capitals seems so close to being just such a team.  It does not make a decision involving a “loyal soldier” any easier, and General Manager Brian MacLellan alluded to the conflict a few days ago.

What it means in the end is that there are things one must do because they are necessary, but that does not mean that one enjoys doing them.  Such was the case, no doubt, with respect to the club’s decision to move Laich.  And as a fan, one can sympathize with the cruel irony of his situation – coming to town in exchange for a legend as the team was seeking to rebuild, traded away for a player in a similar mold when the team is on the cusp, perhaps, of the championship that rebuild was implemented to achieve.

It was a move that the team and fans certainly seemed to feel was necessary, but neither the team nor perhaps most fans are likely to take any enjoyment out of it.  Here’s hoping Brooks does well in Toronto…just not against the Caps.

Great write up. Great Cap. Happy trails Brook, I hope you come back and retire a Cap.