The Peerless Prognosticator is ON THE AIR!!! -- Game 5: Capitals at Devils, October 13th

The Washington Capitals take baggage in hand and head off to Newark, NJ, on Friday night to face the New Jersey Devils as they continue their road-home-road-home-road alternating schedule to start the season.  The Caps have gone to extra time in both of their road contests to date, splitting the decisions with a win in Ottawa in the season opener and a loss in Tampa last Monday.  In trying to get above .500 in the road portion of their schedule, the Caps will be seeking to allow something fewer than four goals, the number tallied by both of their road opponents to date.

The Devils, on the other hand, qualify as a “surprise” team in the early going with a perfect 3-0-0 record.  Granted, two of those wins came at the expense of the Buffalo Sabres and the Colorado Avalanche, teams that will probably be on the outside looking in on the postseason next spring.  But their last win was a convincing 6-3 win over the Toronto Maple Leafs, who are among the darlings of the “it” crowd as a contender to get out of the Eastern Conference in the playoffs.

So far, the Devils are doing it with a collection of no-names (at least little known at the moment).  Jesper Bratt, whose name sounds like a Star Wars character, leads the team with three goals and in total scoring with six points.  The 19-year old Bratt, a sixth-round pick of the 2016 draft is, at the moment, the lowest-drafted member of that 2016 class to appear in, let along score in, an NHL game (162 overall).  It is quite a start for a player who, before suiting up for the Devils, had not played a game in North America.  For the last three seasons he played for AIK IF in HockeyAllsvenskan, the second-highest league in Sweden.

Another part of the youth movement in New Jersey is their second-leading point producer, defenseman and fellow rookie Will Butcher.  A somewhat undersized defenseman (5’10”/190), Butcher was a fifth-round pick of the Colorado Avalanche in 2013, but could not come to an agreement on a contract with the Avs and became a free agent last August.  He signed a two-year/$1.85 million deal with the Devils and jumped right into their lineup not having played a minor league game for either franchise (he spent the last four years at the University of Denver).  Butcher’s five assists (no goals) leads the team. 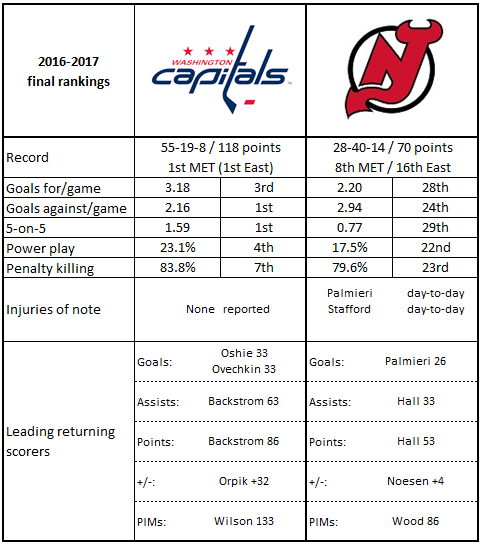 1.  The 50 shots on goal the Devils allowed the Maple Leafs in their 6-3 win on Wednesday was just the second time in franchise history that the team allowed 50 or more shots in a game and the first time they suffered such a barrage in a regulation time decision.  They faced 51 shots in a 1-0 Gimmick win over the New York Rangers on January 12, 2010.

2.  The Devils have already spread around the scoring.  Through three games, ten different skaters have goals, and 17 of 20 skaters to dress have points.  Damon Severson is the only skater to appear in all three games for the Devils having failed to record a point.

3.  New Jersey is the only team in the league in the top-five in both scoring offense (5.33 goals-per-game/2nd) and in scoring defense (2.00/T-4th; through Wednesday’s games).

4.  The Devils are one of three teams to take a lead into the third period in each of the games they played so far (St. Louis and Chicago are the others).  They and the Blues are the only ones to win all of those games.

5.  It is the second period in which the Devils have done their damage thus far.  Their eight middle frame goals and plus-6 goal differential both lead the league.

1.  This contest opens the Capitals’ first set of back-to-back games this season.  This, and Saturday’s game against the Philadelphia Flyers, are on the road.  The Caps played road-road in five back-to-backs last season.  Twice they won both games, twice they lost both games (in on set a loss came in a Gimmick), and once they split the two games.

2.  Big starts, iffy finishes.  The Caps are tied for third in the league in first period goals scored (7) and are tied for allowing the third-fewest goals in the opening frame (2).  But, they are a minus-1 in goal differential over the last 40 minutes of games – eight scored and nine allowed.

3.  Yup…still dead last, and getting worse.  The Caps are last in the league in shots on goal per game (24.8).  And allowing 36.8 shots per game isn’t helping, either (tied for seventh-most).  Washington is one of three teams (Vancouver and Detroit being the others) not to have out-shot an opponent in a game yet.  It’s not even an accuracy thing or getting shots to the net.  The Caps are a minus-37 in shot-attempt differential at 5-on-5, tied for worst in the league with Chicago and St. Louis (numbers from NHL.com).

4.  The Caps have the first (Evgeny Kuznetsov), tied for first (Alex Ovechkin), and tied for seventh (Nicklas Backstrom) point getters in the league through Wednesday games.

5.  If you’re looking for even-strength scoring, the Caps have had it.  They are third in the league in even-strength goals scored (12), trailing only Toronto (13) and Chicago (18) through Wednesday’s games. 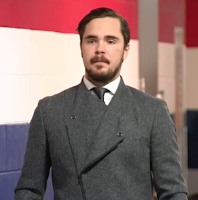 I find myself in a new assignment with my new regiment.  Where I found myself a young charge among battle-tested veterans when I served with the Army of the Potomac, I am now one of those battle-tested veterans in my new billet.  They are so young, and only six of the 20 men in our skating regiment are older than I am.  I find adjustments to my new surroundings to be pleasant and acceptable, even rejuvenating.  We have been blessed to score two goals and assist on two others, my points earned a full fourth of the 16 we have scored so far.  I find myself in a situation that reminds me of that which I had with Nicklas Backstrom when I skated in Washington.  The roles now, it seems, are reversed.  Jesper Bratt is the fresh troop joining our squad, a native of Sweden, as I was back in ’11 when I was in Washington.  Just as Nicklas helped me along, so too might I play that role for young Bratt as he makes his contributions to our cause.  I look forward to our first skirmish – and mine – against our old Washington teammates.  Yours always… Marcus.

It is only four games, two of which went to extra time, but defenseman John Carlson is averaging more than three minutes more per game (25:53) than he averaged last season (22:43).  That is five more shifts per game (31.75 to 26.61).  In his eight previous seasons, Carlson never averaged more than 24:31 in ice time per game (2013-2014 season) or 28.57 shifts per game (2014-2015).  But Carlson is now the dean of the defense corps, based on games played with the Caps (530), and with that comes added responsibility, especially given the state of the defense – younger and without as much depth – as the 2017-2018 season opens.  Carlson has a pair of assists in the four games to date, but despite being second on the club in shots on goal (12), he has yet to find the back of the net.  Only Victor Hedman of the Lightning has as many or more shots in three games (14) without a goal among defensemen.  If there is a team against which he might break through, it could be New Jersey.  Carlson is 3-13-16, plus-11 in 27 career games against the Devils.

At least in the early going, the Devils look like one of those annoying teams of youngsters that skate like a herd of golden retriever puppies getting all over you and making you sick with their seemingly limitless reservoir of energy.  Eleven of their skaters to dress so far are 25 or younger.  Only one player to dress for all three games – Andy Greene – is older than 30.  The Devils look as if they are the latest entry in fulfilling the NHL’s version of the Olympic motto.  Instead of “faster, higher, stronger;” it is “younger, faster, cheaper (they have the fourth-lowest cap hit in the league, according to capfriendly.com).”  It presents the latest challenge to the Caps and their ability to use experience and guile to offset a team that might be quicker.  Guess you know how we think they will meet that challenge…