The Peerless Prognosticator is ON THE AIR!!! -- Game 6: Rangers at Capitals, October 17th

If it’s Wednesday, it must be Washington Capitals Hockey.  And so it is, for the third straight week the Caps will host an opponent on a Wednesday night.  Week 3’s offering is the New York Rangers, a team that will be playing in the back-half of a back-to-back set of games when they visit Washington. They host the Colorado Avalanche on Tuesday night.

The Rangers’ problems are more immediate.  They have one win on their resume going into Week 3 action, albeit an impressive one, beating the San Jose Sharks in overtime on October 11th.  On the other side of the ledger are four regulation losses, one of them a ghastly 8-5 loss to the Carolina Hurricanes, a game they led at one point, 2-0, barely six minutes into the contest.

The Rangers’ immediate problem is that they struggle to score.  Two weeks in, and they ranked 23rd in the league in scoring offense (2.40 goals per game through Monday), and no skater had more than two goals.  Jesper Fast has only one goal so far, but he leads the team in total points through two weeks (1-3-4).  Fast is a capable player in many respects, but if he is involved in a third of your team’s points, there are scoring issues.  What Fast is, is probably a bottom-six forward on a good team, a player who has averaged 10 goals and 28 points per season in his three full years in the NHL coming into this season.  However, he is getting middle six time on this club (fifth among forwards in even strength time on ice per game – 13:57).  Fast is also a player who passes as a grizzled veteran for the Rangers.  Only three Rangers on the roster have played in more games for the club since the 2015-2016 season than Fast (223): Mats Zuccarello (246), Kevin Hayes (236), and Marc Staal (226).  Fast is 3-1-4, minus-3, in 16 career games against Washington.

Brett Howden is one of three rookies to dress for the Rangers so far this season and the only one to have scored a goal.  In fact, he is one of the quartet with two goals in the early going, alternating games with and without goals through five contests.  He was a first round draft pick of the Tampa Bay Lightning in 2016 (27th overall) but did not make it out of the Lightning development system before he was traded to the Rangers with Vladislav Namestnikov, Libor Hajek a 2018 first round draft pick, and a conditional 2019 second round draft pick for Ryan McDonagh and J.T. Miller at the trading deadline last February.  Moving to a team lacking the depth the Lightning have provided Howden with an opportunity in what is his first pro season after spending five seasons with the Moose Jaw Warriors in Western Hockey League in Canadian junior.  The Rangers are hoping he can duplicate his goal-scoring ability displayed at Moose Jaw, where he recorded 109 goals in 248 games.  This will be his first appearance against the Capitals.

When defenseman Marc Staal dresses for his 50th game this season he will tie Jim Neilson for fourth place on the all-time list of games played by Ranger defensemen.  With a 36-point season he would become the 16th defenseman in Ranger history to record 200 points.  The latter goal will be difficult, for Staal has never posted as many as 30 points in a season in his 11 previous seasons in the NHL, all with the Rangers.  More a defensive defenseman, he has seen his ice time diminish somewhat over the last four seasons. In 2014-2015 he averaged 21:08 per game in 80 games.  That dropped to 19:41 in 77 games the following season, 19:11 in 72 games in 2016-2017, and to 18:32 in 72 games last season.  He is averaging just 16:46 through five games over the first two weeks of this season, the lowest average ice time of his career to date.  In 36 career games against the Caps, Staal is 1-9-10, plus-5. 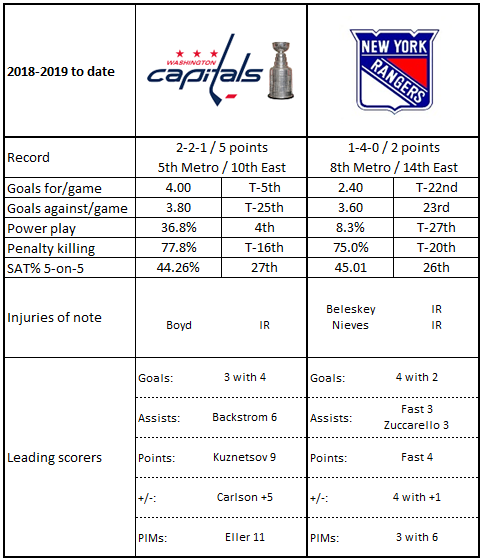 3.  Going into Week 3, only two teams in the league had fewer power play chances than the Rangers (12).  Dallas had 11, and Edmonton had 10 opportunities.

4.  The Rangers have yet to lead at either intermission in any game through the first two weeks.

3.  Only eight Capitals skaters have been charged penalty minutes so far this season.  If you had Lars Eller and Jakub Vrana leading the team with four penalties taken apiece, raise your hand.

4.  Ten Capitals skaters have goals through five games.  Last season, the Caps didn’t have their tenth skater with a goal until Game 10.

5.  No team in the East has more players with at least ten shots on goal and a shooting percentage of at least 20 percent than the Caps (T.J. Oshie: 33.3 percent; Evgeny Kuznetsov: 23.5 percent; Alex Ovechkin: 21.1 percent).  Only one team in the league has more (Colorado has four).

Alexandar Georgiev was the unfortunate victim in goal in that 8-5 debacle against Carolina.  The other four contests featured Henrik Lundqvist in net, and he might be the league’s most hard-luck player in the early going.  His 2.03 goals against average was eighth-best in the league through two weeks among 40 goalies with at least 100 minutes.  His save percentage of .938 was eighth among that group as well.  He has only one win to show for it in four decisions through two weeks, though, the 3-2 overtime win over San Jose in which he stopped 41 of 43 shots.

Lundqvist is coming off consecutive disappointing seasons, by his standards.  Over seven seasons, from 2009-2010 through 2015-2016, Lundqvist never had a goals against average over 2.50 or a save percentage under .920.  He was a Vezina Trophy finalist twice, winning once (2011-2012, a season in which he was also a first-team league all-star and a Hart Trophy finalist).  He was the only goalie over that seven-year period with a cumulative goals against average under 2.30, a save percentage over .920, and at least 30 shutouts.  The last two years were a different story.  Two years ago he was 31-20-4, 2.74, .910 with two shutouts, and last year he was 26-26-7, 2.98, .915, with two shutouts.  It calls into question whether Lundqvist, who will be 37 years old before season’s end, can sustain his performance level, not to mention whether the Rangers’ performance in front of him can catch up to his superb numbers so far.  In 38 career games against the Caps, Lundqvist is 21-12-5, 2.66, .909, with four shutouts.

Andre Burakovsky was a hero of Game 7 of the Eastern Conference semifinal against the Tampa Bay Lightning last spring.  His two goals helped complete a comeback for the Caps, who fought off elimination twice in the seven-game series to advance to the Stanley Cup final.  Since that two goal performance, though, Burakovsky is 0-4-4, minus-4, with just seven shots on goal in ten games covering both the Cup final last spring and the first five games this season.  What is distressing about his start this season is that last season he “played” better than his production, his individual shot-attempts-for on ice at 5-on-5 of 52.49 percent being best on the team (source: NHL.com).  However, that measure has fallen off a cliff in the early going, his 37.62 percent being third-worst among the 20 skaters to dress so far.

It is a confounding set of developments given that he finished the 2017-2018 regular season rather strong with six points and a plus-10 in his last eight games.  He has not yet taken that next big step forward, and although he is still just 23 years old, he has more than 250 regular season games on his resume.  The skill he has displayed intermittently needs to be expressed on a more consistent basis.  In 13 career games against the Rangers, Burakovsky is 1-2-3, minus-3.

These are two teams that have played a bit sluggishly to start the season, and both have suffered one blowout loss, but there are differences.  The Caps opened their season with a difficult schedule (five playoff teams from last season, including their opponent in the Stanley Cup final), a pair of back-to-backs, and they have had absences from their top right wing (Tom Wilson/suspended) and a to—four defenseman (Michal Kempny/concussion).  The Rangers’ schedule, on the other hand, has been uneven in terms of quality of competition, having faced two playoff caliber teams (San Jose, Nashville) and three teams of questionable postseason potential (Buffalo, Carolina, and Edmonton).

Washington has not put things together on a consistent basis since their Opening Night 7-0 win over the Boston Bruins.  New York hasn’t raised their level of play in front of Henrik Lundqvist to the level he has displayed to date.  Can the Caps put a solid 60 minutes together against a long-time nemesis?  Can Lundqvist continue his fine start in spite of the lackluster play in front of him?  Like so many other meetings between these teams over the last decade, it is another battle pitting the Caps ability to solve Lundqvist against his ability to stave off the waves of Cap scorers.

Fun Fact of the week:
As the 3rd week of the season starts... Brooks Orpik has more goals than Sidney Crosby!