The Peerless Prognosticator is ON THE AIR!!! -- Game 7: Panthers at Capitals, October 19th

The Washington Capitals wrap up their three-game home stand on Friday night when they host the Florida Panthers.  The Caps are 3-1-0 on home ice so far and have outscored opponents by an 18-9 margin in the four games.  It will be the Caps' last home contest before they embark on a four-game road trip that will take them through western Canada and to Montreal before returning for a November 3rd game against the Dallas Stars at Capital One Arena.

The Panthers will be taking the ice for only the fifth time so far this season, and they will be looking for their first win.  Regulation losses to the Columbus Blue Jackets and the Vancouver Canucks in south Florida were sandwiched between Gimmick losses to the Tampa Bay Lightning in the season opener and to the Philadelphia Flyers last Tuesday, both of those extra time losses coming on the road.

It is not as if the Panthers have been blown out of games.  In addition to the two trick shot losses, the two regulation losses were also by a single goal in each.  It’s a matter of just lacking enough scoring (the Panthers rank tied for 17th in scoring offense at 3.00 goals per game) and lacking just enough defense and goaltending to keep opponents from scoring (they rank tied for 22nd in scoring defense with 3.50 goals allowed per game).

The offense, such as it is, has balance – nine players have goals so far – but no one has put a lot of crooked numbers on the score sheet.  Three players lead the club with two goals apiece.  Two of them would be expected among the team’s leaders.  Aleksander Barkov (2-1-3 so far) is gaining wide acceptance as one of the best two-way forwards in the league.  Last season he set career highs in assists (51) and points (78), and he led the league in shorthanded goals (five).  It was also the first of his five seasons in the league in which he averaged more than 20 minutes of ice time, his 22:04 only one second less than Anze Kopitar’s 22:05 in average ice time among the league’s forwards.  He also finished fourth in voting for the Selke Trophy as the league’s top defensive forward and finished third for the Lady Byng Trophy for gentlemanly play.  Since 2005-2006 Barkov is the only player in the league to appear in at least 50 games, average at least 22 minutes per game, record at least 75 points, and be charged with fewer than 15 minutes in penalties in a single season.  He was 27-51-78, plus-9, in 79 games with only 14 penalty minutes last year.  He is 3-5-8, plus-3, in 12 career games against Washington.

Evgenii Dadonov spent his first three seasons in Florida playing only intermittently, going 10-10-20, minus-5, in 55 games played over those three seasons.  Last year was an awakening.  He exploded for 28 goals and 65 points in 74 games.  Of his total, 21 goals were scored in his last 40 games.  However, while scoring came easier to him last season, getting loads of ice time did not.  In 22 games in which he skated more than 20 minutes, Florida was just 7-12-3.  The thing to look for in Dadonov this season is whether that 28-goal season was an outlier.  This is a player who, in 155 games in the AHL, recorded only 33 goals, about a 17-goal pace over 82 games, and he had 17 of those 33 goals in his first pro season, with the Rochester Americans in 2009-2010.  Dadonov is 2-2-4, minus-4, in nine career games against the Capitals.

The third Panther with two goals so far qualifies as an unexpected entry.  Frank Vatrano was an undrafted free agent signed out of the University of Massachusetts by the Boston Bruins in March 2015.  He made his way into the Bruin lineup for 108 games over the next three seasons (20-11-31, minus-9) before he was traded to Florida for a 2018 third round draft pick last February.  He has found Florida a bit more to his liking in brief exposure so far.  In 19 games, covering the end of last season and the beginning of this season, Vatrano has seven goals on only 37 shots (18.9 percent shooting) in 19 games, a 30-goal pace over 82 games.  But as we said…”brief exposure.”  Both of his goals this season came in the Panthers’ 6-5 Gimmick loss to the Philadelphia Flyers last Tuesday.  He has yet to record a point against the Caps in three career games against them. 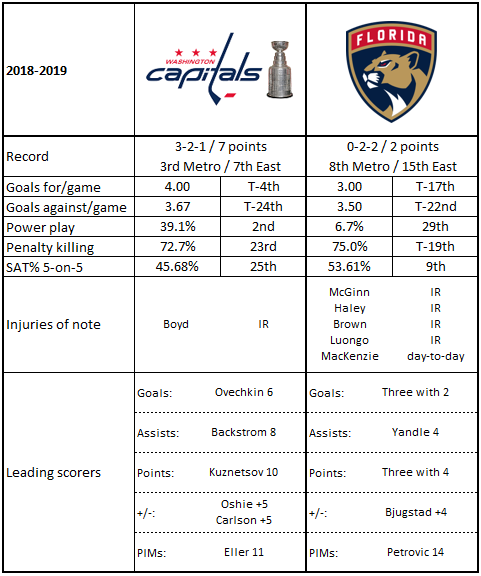 2.  How close does Florida play to the margin?  They have dressed eight defensemen so far this season, and only one – Mark Pysyk – is a “minus” player (minus-3).  Not what one might expect of a team with no wins in four games.

3.  Speaking of defense, it is a bit of an offense-challenged group so far.  Jacob MacDonald has the only goal among the eight defensemen to play so far, and Keith Yandle is the only defenseman with a power play point (one assist).

5.  Florida is “playing” better than it is “performing,” at least in terms of shot attempts.  Their shot attempts-for percentage at 5-on-5 (53.61) is ninth-best in the league.

1.  What a difference a year makes…

3.  Washington’s plus-3 first period goal differential is tied for best in the East (with Tampa Bay and New Jersey through Wednesday’s games).

4.  The Caps’ third line of Andre Burakovsky, Lars Eller, and Brett Connolly is a combined 1-for-31 shooting so far this season (Eller has the only goal), a 3.2 shooting percentage.  Hopefully, “playing” better in terms of possession and the eyeball test, as they did against the Rangers on Wednesday, will translate into results.

Roberto Luongo suffered a knee injury mid-way through the Panthers’ 2-1 Gimmick loss to the Tampa Bay Lightning on Opening Night, an injury that resulted in his being placed on injured reserve and whose status is uncertain for the next week or two.  That leaves the number one goaltending chores to James Reimer, now in his ninth season after having been drafted in the fourth round of the 2006 entry draft by the Toronto Maple Leafs for whom he played 207 games over his first six seasons.  Reimer came to Florida from the San Jose Sharks (who obtained him from Toronto in a February 2016 trade) in July 2016 as a free agent.  His role in that span has been nominally Luongo’s backup, but he appeared in 43 games in his first season in Florida in 2016-2017 and in 44 games last season, quite a bit of work for a “backup.”  His numbers have been doing a slow leak over the last few seasons.  Since 2015-2016, when he went 17-14-7, 2.31, .922 in 40 games split between Toronto and San Jose, his goals against average rose to 2.53 and then to 2.99 last season, while his save percentage dropped, first to .920 and then to .913 last season.  It is early, but in three appearances so far those numbers have inched downward again (3.62/.885).  He has never been much of an October player, though, posting a 2.93 GAA and a .909 save percentage in October games over his career.  Reimer is 4-4-2, 2.16, .937 and one shutout in ten career appearances against Washington.  Those goals against and save percentage numbers against the Caps are the best he has against any Eastern Conference team he faced over his career.

Who is the only Capitals forward with a personal SAT over 50 percent at 5-on-5?  Bet you didn’t have “Jakub Vrana” (51.38 percent) as the answer (well, maybe you did, since he’s the “player to ponder” here).  The number in this measure that jumps out is his shot attempts at 5-on-5 for which he has been on ice.  He has been on ice for more 5-on-5 shot attempts (93) than any other Capital through six games.  However, the aggregate is made up of individual games, and his number is weighted quite a bit by the game against Toronto in which he was on ice for 21 5-on-5 shot attempts and only 7 shot attempts against.  Oddly enough, perhaps, the two games in which he was over 50 percent (against Pittsburgh being the other), the Caps lost.  His worst game (39.39 percent) was in the 5-2 win over the Vegas Golden Knights.  Fancy stats can be wacky stats sometimes.  Vrana has yet to record a point against the Panthers in three career games.

You do not want to be the club against which your opponent gets their first win of the season.  If Detroit beats Tampa Bay on Thursday night (the Red Wings, the only other winless team, are 0-4-2), the Caps will be in that situation on Friday.  Washington played well in spots against the New York Rangers on Wednesday, but it has been since the win over Vegas that the Caps put together a solid 60-minute effort.  Perhaps it is a variation of the hangover effect, not being able to muster a full measure of focus and attention for what might be viewed as “lesser” opponents.  That can be a dangerous attitude against a team that hasn’t been out of any game so far and that has played the Caps tough in recent meetings.  What makes this a bigger game for the Caps is that this is the getaway game before the western Canada tour, and it sure would be better to start that trip with a 4-2-1 record than a 3-3-1 record.