The Washington Capitals hosted the Philadelphia Flyers in the last meeting in their four-game season series on Sunday afternoon.  The Caps won each of the first three games, each time scoring five goals.  This time, the Caps failed to record five, but they did get three, and that was enough in a 3-1 win to sweep the season series.

Washington got off to a good start in the first period.  In the fourth minute, Alex Ovechkin tried to feed the puck from low in the right wing circle to Tom Wilson low on the left side.  Claude Giroux, who was near the end of a long shift, slid across and muffled the pass, but the puck slid out to the top of the offensive zone, where Nick Jensen gathered it.  Jensen backed off to the left point and sent the puck toward the net, but Tom Wilson got the blade of his stick on it and redirected it past goalie Brian Elliott to make it 1-0, 3:52 into the period.

The Caps enjoyed two power plays in the period, but they failed to convert either of them.  The teams went to the first intermission with the Caps holding that one-goal lead.

-- The shot profiles were oddly different for each team, the Caps with six even strength and five power play shots on goal, while Philadelphia had 10 even strength shots and one shorthanded shot on goal.

-- The Caps’ power play went 0-for-2 in the period, bringing their performance to 3-for-23 over their last seven games plus one period (13.0 percent).

It took less than a minute for the Caps to take a penalty, Alex Ovechkin sent off on a slashing call, and put the Flyers on a power play.  The Flyers managed one shot and failed to convert, and the teams played on.

The Flyers started mounting pressure, but they could not solve goalie Braden Holtby.  The opportunities lost came back to bite the Flyers just past the half way point of the period.  Andre Burakovsky hounded Sean Couturier off the puck in the corner to the left of Elliott. The puck then worked its way to Matt Niskanen at the right point.  His drive was redirected by Travis Boyd under the right arm of Elliott, and it was 2-0, 10:47 into the period.

The Flyers got one back on a power play with less than three minutes left in the period.  Off a scramble in front, Matt Niskanen tried to sweep the puck out of the low slot from one knee and managed only to put it on the stick of Jakub Voracek.  From the low right wing circle, Voracek snapped a shot that beat Holtby through the pads to make it 2-1 at the 17:10 mark.  That would be how the teams went to the second intermission.

-- That probably qualified as one of the worst, if not the worst, periods of the year for the Caps in terms of shot production.  They were out-shot in the period, 20-7, but they were out-attempted, 44-10.

-- Travis Boyd and Andre Burakovsky, arguably the best two players for the Caps over the first 40 minutes, had a combined ice time of 12:02.

Washington took advantage of the Flyers’ inability to get a puck deep into the offensive zone in the ninth minute.  Philippe Myers was the Flyer who failed to get the puck in deep, and it ended up on the stick of Brett Connolly.  From the defensive blue line, Connolly sent the puck into space in the neutral zone, and Jakub Vrana skated it down before going offside.  He broke in on Elliott and snapped a shot under his right pad to make it 3-1, 8:07 into the period.

Vrana almost made it 2-for-2 in breakaways, but his attempt that beat Elliott chipped the outside of the post with just over six minutes left.

The Caps had chances with an empty net late, but could not convert, skating off at game’s end with a 3-1 win and a 4-0-0 sweep of the season series with the Flyers.

-- This was the second time in the history of this rivalry that the Caps swept the Flyers.  The first time was in 2006-2007.

-- Travis Boyd snapped a 25-game streak without a goal.  Until he scored against the Flyers, he had not scored since he got one in a 3-2 win in Detroit over the Red Wings on January 6th.  It was his first goal on home ice since December 11th, also against Detroit, in a 6-2 win.

-- Tom Wilson gets the buffet coupon.  In 19:44 of ice time, he had a goal, a penalty, three shots on goal, five shot attempts, five hits (led the team), a giveaway, a takeaway, and won his only faceoff.  Guess that whole James van Riemsdyk submarining his legs in the first period didn’t quite work out as planned.

-- Alex Ovechkin has only two goals in his last seven games as he continues to pursue a 50-goal season, but he has points in six of those games, including an assist in this one (2-5-7).

-- Braden Holtby was the story with 35 saves on 36 shots, including 30 saves on 31 shots over the first 40 minutes.  It was the 18th game this season in which he faced more than 35 shots.  He is 8-7-3 in those games, and this was the third instance among those games in which he held an opponent to one goal.

-- At no point this season did the Caps ever trail the Flyers.

The Capitals extended their lead in the Metropolitan Division to three points, and they probably ended the flickering playoff hopes for the Flyers, who find themselves seven points behind Montreal for the last playoff spot with six games to play.  And, they would have to climb over the Columbus Blue Jackets as well as the Canadiens.

That said, it was not a particularly good game for the Caps.  Winning is the object, and the Caps fulfilled that objective, but truth be told, this probably captures the quality of the contest… 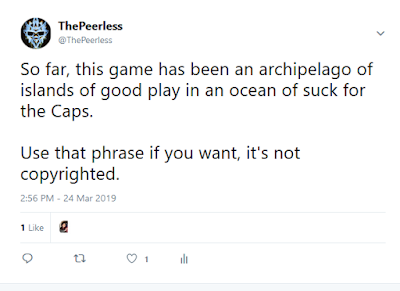