The Peerless Prognosticator is ON THE AIR!!! -- Game 15: Sabres at Capitals, February 18

The Washington Capitals return home from a two-game trip to Pittsburgh to host the Buffalo Sabres on Thursday night at Capital One Arena.  The Caps come home having snapped a four-game losing streak with a 3-1 win over the Penguins in Pittsburgh on Tuesday night, while the Sabres played their first games in February after a COVID-protocol absence from the ice since January 31st.  They dropped a pair of games to the New York Islanders on home ice, a 3-1 decision on Monday and a 3-0 shutout at the hands of the Isles on Tuesday.

Their game against the Caps on Thursday will be the Sabres’ first on the road since a four-game road trip in mid-January happened to end in Washington that resulted in a split of 4-3 Gimmick wins, the Caps winning the first of them and the Sabres returning the favor in the second contest.

The Sabres, in a small population of road games, has had balanced offense, eight players sharing the 12 goals scored, four of them with a pair apiece.  The surprising part of that might be that none of the goal scorers on the road to date are named “Jack Eichel.”  He does have four assists in four road games, though, so his contributions to the score sheet – leading the team in road points to date -- are being recorded in other ways.  Still, his goal scoring overall is off with only two goals on 42 shots in 12 games, and after starting the season with six points in his first three games (all assists, three of them in two games against the Caps), he is 2-3-5, minus-9, in his last nine games.

The absence of goals overall is unusual for Eichel, but not having scored on the road is not an unusual matter for him.  In 184 home games over his career he has 87 goals, but in 192 road games he has only 57.  He is without a goal on the road since he had a pair, including the game-winner, in a 5-2 win in Pittsburgh against the Penguins last February 22nd, a streak that is at nine road games and counting.  His career assist total is higher on the road (110) than on home ice (99), but not enough to offset the home-road difference in goal scoring.  Eichel is 3-9-12, minus-4, in 15 career games against the Caps.

Buffalo has dressed nine defensemen in games this season, but only two of them have appeared in all of them so far.  That Rasmus Dahlin is one, even with his just having come off the COVID protocol list last weekend, is not very surprising.  The other is Colin Miller, a six year veteran playing for his third club and fourth organization since he was taken with the last pick of the fifth round in the 2012 Entry Draft.  Drafted by the Los Angeles Kings, Miller never skated with the parent club before he was traded to the Boston Bruins with goalie Martin Jones and a first round pick in the 2015 Entry Draft for Milan Lucic.  Miller lasted two seasons in Boston before he was taken by the Vegas Golden Knights in the 2017 Expansion Draft.  Two seasons in Vegas, and he was off again, traded to Buffalo for a pair of draft picks in June 2019.

Miller has had a bit of difficulty getting untracked on offense with the Sabres.  After posting 13 goals in 147 games with Vegas over two season, he had only one goal in 51 games (on 79 shots) last year with the Sabres.  His 1.3 shooting percentage ranked 175 of 189 defensemen playing in at least 40 games.  He has been a bit better, efficiency-wise, in 12 games to date this season, but he still has only one goal on 14 shots (7.1 percent), that one coming against the Caps in a 4-3 Gimmick win in Washington on January 24th.  Miller is 3-2-5, minus-8, in 15 career games against Washington.

He might not be the clear number one goalie at the moment, but Linus Ullmark has had the best performance of three goaltenders employed by the Sabres so far this season.  He dropped his first two decisions of the season, both to the Capitals (a loss in regulation and another in the Gimmick), but since then he is 3-1-1, 2.70, .914 in five appearances.  If there is a concern approaching this game, it might be that in his most recent appearance, against the Islanders on Monday, Ullmark stopped 26 of 29 shots in a 3-1 loss.  It was the first time in seven appearances this season that his save percentage was under .900 (.897).

Ullmark has spent his entire NHL career in the Sabres organization, since he was taken by Buffalo in the sixth round (163rd overall) in the 2012 Entry Draft.  However, his current contract with the Sabres, a one-year/$2.6 million deal agreed to after Ullmark was reported ready to ask for $4.1 million in arbitration,  expires at the end of this season. While he might not be in the elite tier of goaltenders come the summer free agent period, a goalie who turns 28 years of age in July who can man a back-up role or serve as a number one when needed, and who has shown improvement in recent years, will be in demand.  Ullmark is 2-3-1, 2.91, .899 in six career appearances against the Capitals. 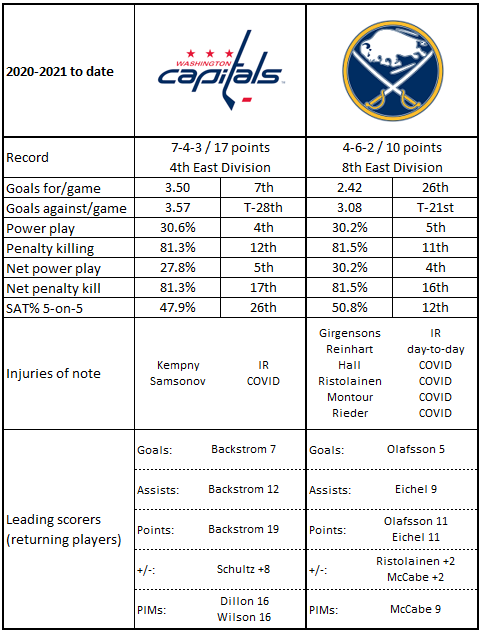 3.  At the other end, Buffalo has only 10 third period goals scored, tied for third fewest in the league (with New Jersey and San Jose).

4.  Buffalo has scored first in games only three times in 12 games.  While they have not suffered a loss in regulation when doing so (2-0-1), their two wins are tied for second-fewest in the league, with Nashville (Ottawa has not won in four tries when scoring first).

5.  The Sabres are one of three teams without an empty net goal this season (Ottawa and Colorado are the others).

3.  The Caps have scored at least one power play goal in six of seven home games this season.  The only game in which they did not was January 22nd, when they were 0-for-1 in a 4-3 Gimmick win over Buffalo.

4.  Washington is 1-2-1 on home ice when leading after one period, their .250 winning percentage ranking third worst among teams that have taken leads into the first intermission on home ice.  Not that the Caps are a lot better on home ice when leading after two periods. They are 2-1-0, but that is three leads after 40 minutes in seven home games, and their .667 winning percentage is tied for fourth worst among the 30 teams to have taken leads into the last period.

Has any player in recent memory with as much talent as Taylor Hall traveled as often?  Hall is in his 11th NHL season, and the Sabres are his fourth team (Edmonton, New Jersey, and Arizona are the others).  He is an unrestricted free agent working on a one-year/$8 million contract with Buffalo, so another move at the end of this season (if not sooner, which raises the possibilities of two new teams in his future – as a rental this season and with as a free agent in the off-season) is possible.

Hall has not been quite the player he was, performance-wise, since his Hart Trophy season in 2017-2018 when he was 39-54-93, plus-14, for the New Jersey Devils.  In two plus seasons since then, he is 28-70-98, minus-29, in 110 games for the Devils, Arizona Coyotes, and Buffalo.  Good numbers, but a notch or two under that most valuable player scoring line.  Hall opened this season with a goal and an assist against the Caps, but he is without a goal in 11 games since then.  His 3.2 shooting percentage (one goal on 31 shots) ranks 115th among 119 forwards with at least 30 shots on goal.  He has never been an especially efficient shooter (10.3 percent career shooting percentage), but that efficiency has taken a significant dip in the second half of his career.  That 2017-2018 MVP season is the only one in the past seven seasons, including this one, in which his shooting percentage was over 10 percent (14.0).  Hall is 7-14-21, plus-1, in 18 career games against Washington.

His numbers this season do not leap off the page: 2-3-5, minus-4, in ten games.  However, Lars Eller might be thought of as the mortar that keeps the bricks in place for the Caps.  Centering the third line on most nights, he can fill in as a scoring line center in a pinch.  He is one of nine Capitals with multiple power play points this season (two).  His 53.8 winning percentage on faceoffs leads the team (minimum: 25 faceoffs), and he is even better in the defensive end (54.8 percent).  He is second among forwards in shorthanded ice time (2:41).  With a $3.5 million salary cap hit, Eller looks like a bargain relative to his cohort of centers in the $3.0-4.0 million cap hit range.

Not all is good, though.  His on-ice even strength goals for average is weak (35.7 percent), tenth of 12 forwards having played 12 games, a product of his being on ice for only five even strength goals scored by the Caps.  And, a lot of his plus-minus problems (minus-4 for the season) can be traced to one game, a minus-4 result in the Caps’ 7-4 loss to the Philadelphia Flyers on February 7th.  Nevertheless, Eller brings a three-game points streak into this game (1-2-3), and he is one point shy of 300 point in his NHL career (134-165-299).  If that point is scored shorthanded, he will jump into the top-ten in shorthanded points scored by centers in Capitals history (Glen Currie, Joe Juneau, Andrei Nikolishin, and Ron Lalonde are currently tied for ninth with seven shorthanded points apiece).  Eller is 3-6-9, minus-9, in 44 career games against Buffalo.