It’s Olde Tyme Patrick Division Week for the Washington Capitals, starting with a pair of games against the Pittsburgh Penguins on Tuesday and Thursday in Washington.  After three straight losses to the Pens to open their season series, the Caps beat their long-time rival, 3-1, last Tuesday to bring their season record to 1-1-2 against Pittsburgh.

That loss to the Capitals is the Penguins’ only loss in their last five games after suffering through a 1-3-1 stretch before their recent run of success.  Their recent up-and-down performance aside, the Pens have struggled on the road this season.  Their 2-5-1 record and .313 points percentage rank 27th in the league.  The problem is an inability to keep pucks out of their own net, averaging 4.00 goals allowed per road game, and that starts with goaltenders.  Tristan Jarry has been dragging more than an overnight bag among his baggage on the road.  Of 38 goalies logging at least 200 minutes, Jarry ranks last in the league in save percentage (.826).  It is something of a turnaround for Jarry, who ranked 19th among 50 goalies with at least 750 minutes on the road last season (.915).  In five road games this season, Jarry has yet to allow fewer than three goals and is 0-4-1.

Working out from the goaltenders, there is the defense, and that starts with Kris Letang, who occupies the top spot or close to it in just about every meaningful statistical category among defensemen in team history.  Of the 222 defensemen to dress for the Penguins in team history, Letang ranks first in games played (823), first in goals (123), first in assists (417), first in points (546), third in plus-minus (plus-62), tenth in penalty minutes (590), first in power play goals (44), second in power play points (213), tied for first in shorthanded goals (four), first in shorthanded points (12), first in overtime goals (five), first in game-winning goals (25), second in ice time per game (23:59), first in hits (1,346), first in blocked shots (1.244), and for good measure first in Gimmick goals (25) and game-deciding Gimmick goals (15).

It is no surprise that Letang leads Penguin defensemen this season in goals (two) assists (seven), and points (nine).  He has ramped up his offense of late, going 2-4-6, plus-2, in his last six games. On the other hand, he has only two points in seven road games this season (both assists) and has a minus-2 rating, but those two points came in his last two road outings.  If there is a lingering issue with Letang, it is his durability.  Since he appeared in all 82 games in 2010-2011, he has played in more than 70 games in a season twice and has missed more than a quarter of the Penguins’ games over that span (183 of 707 games).  Letang is 7-17-24, minus-25 (his worst against any team), in 44 career games against the Caps. 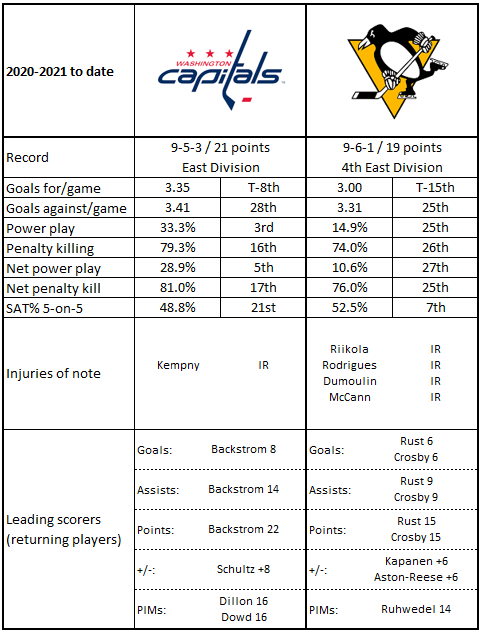 1.  Pittsburgh has the worst road power play in the league (7.1 percent).  They are the only team in the league with a net power play (accounting for shorthanded goals scored against) on the road of 0.0 percent.

2. The Penguins have the best shot attempts-for at 5-on-5 percentage on the road this season (56.3 percent).  Despite this, their goals-for percentage of 48.5 percent on the road ranks 16th.

3. Pittsburgh has three losses by three or more goals on the road; only four teams have more.

4. Eight different defensemen (and all who have played more than two games) have at least one point for the Pens this season.

5.  If the Pens win one of the two games, it will be their 50th all-time win in Washington.

1.  The Caps have allowed 13 third period goals on home ice this season, tied with Anaheim for most in the league.

2. Washington is 3-2-1 when scoring first on home ice.  Only four teams have a lower winning percentage on home ice than the .500 for the Caps.

3.  The Caps have the worst net penalties (penalties drawn less penalties taken) in the league (minus-9), and their net penalties per 60 minutes (minus-0.88) ranks 29th.

5.  Only Edmonton has allowed more goals than home ice (38) than the Caps (34, tied with Vancouver).

Before this season started, there were those who thought defenseman John Marino could make Kris Letang expendable. Others, no less than former Penguins general manager Jim Rutherford, thought his destiny was as the team’s number one defenseman.  Predicting one’s destiny is one thing, but having it realized is another, and for Marino there is still work to be done in fulfilling it.  Last season, in a deep field of rookie defensemen that included Quin Hughes, Cale Makar, and Adam Fox, Marino finished fifth in his rookie defenseman class in goals (sixth), fourth in assists (20), fourth in points (26), second in plus-minus (plus-17), tied for fourth in power play points (four), fourth in average ice time (20:15), ninth in hits (72), and sixth in blocked shots (77).

To say it was a surprise is a bit of an understatement.  Not only was he a sixth-round pick by Edmonton in the 2015 Entry Draft (154th overall), two defensemen were taken ahead of him in that draft by the Oilers (Caleb Jones and Ethan Bear). His “destiny” was not looking good when he was traded to the Penguins in July 2019 for a sixth-round draft pick in the 2021 Entry Draft.  What he did do was jump right from Harvard University, where he played three seasons, to the Pens last season, one in which his performance was good enough to finish eighth in Calder Trophy voting for top rookie.

This season is a different story.  Marino is the only Penguin defenseman to appear in all 16 games to date, and he is averaging more than 23 minutes a game (second to Letang), but he has only two points (both assists) in those sixteen games.  Marino is 0-2-2, even, in six career games against Washington.

When Justin Schultz took a puck to the face in a game against the New York Islanders, it was a scary moment for Schultz and Caps fans.  It was unfortunate for the Caps, given that in eight games, including that game against the Isles, Schultz was 2-4-6, plus-9, making the decision to sign him to a two-year/$8.0 million contract last October look like a sound one.  Schultz missed four games.  He has not been quite as prolific since his return (0-2-2, minus-1, in five games, but he logged more than 20 minutes for the first time since his return in the Caps’ 4-3 win over New Jersey on Sunday (after averaging less than 18 minutes in his first four games since his return), and he is looking more and more as if the time lost was a speed bump more than an obstacle to a solid season.

Schultz has rarely lacked for offense in his nine-year career.  In eight years preceding this one, his average season scoring line per 82 games was 10-34-44, and he posted more than 30 points three times with a high of 51 with the Penguins in 2016-2017.  Last season was a disappointment for Schultz and the Penguins (3-9-12, minus-13, in 46 games), following on a sub-par season in 2018-2019 (2-13-15, even, in 29 games.  In addition to the lower offensive production, those two seasons highlighted a concern.  He missed 76 games over those two seasons to a fractured leg and lower body injuries, and he has never played a full season’s slate of games (more than 70 games three times), not including the abbreviated 2012-2013 season in which he dressed for all 48 games with Edmonton.

Schultz is the second leading goal scorer among defensemen (tied with Zdeno Chara with two), and his eight points trail only John Carlson (14).  He has also taken some of the power play ice time burden off of Carlson.  While Carlson still leads the team at 3:10 per game, Schultz is averaging 2:03 on the man advantage.  And, he has been getting regular turns in pressure moment, evidenced by his 1:15 in overtime ice time per game, second to Carlson (1:44).  The former Penguin is 0-3-3, minus-2, in nine career games against Pittsburgh.

Two points (or four points in a two-game series) are important for their own sake, but sometimes an added dimension is putting additional space between yourself and an opponent to whom you are always paying attention and against which you measure yourself.  That is what makes these two games important.  The difference between pulling out to a six-point lead over the Penguins with 37 games to play and falling behind Pittsburgh by two points is, as the kids say, huge.