The Washington Capitals get started on their last full week of the regular season with a two-game set against the New York Rangers at Madison Square Garden.  This two game-set will also close the books on the road portion of the Caps’ season.  The games will also wrap up the Ranger’s home slate of games for this season, where they go into the week with a 14-9-3 record, ranked 14th in points earned (31) and 15th in points percentage (.596) on home ice.

The success the Rangers have enjoyed at MSG this season is largely a product of a prolific offense that averages 3.50 goals per game (tied for fourth in the league).  That offense has been led by Artemi Panarin, who is 12-25-37, plus-12, on home ice, fourth in the league in points recorded on home ice so far this season.  Panarin has been little short of spectacular for the Rangers since his arrival last season.  His 151 points in 110 games overall rank fourth among all skaters over the past two seasons, and his 1.37 points per game ranks third.  And if playing in New York is a pressure cooker for pro athletes, Panarin has held up well.  His 87 points at the Garden over the last two seasons ranks third among all players in total scoring on home ice, and his 1.55 points per game ranks third as well.  Panarin has scored in bunches this season, posting 18 multi-point games, tied for fourth in the league.  He has 12 multi-point games on home ice, tied for second in the league and trailing only Connor McDavid (17).

Panarin’s scoring matters, too.  He has been held without a point only 13 times in 41 games this season, and the Rangers are 2-9-2 in those games.  On the other side, the Rangers are 20-4-4 in the 28 games in which he recorded at least one point, and they have lost only one game in regulation in which he had a multi-point game (January 19th in a 4-3 loss to New Jersey). In 11 games from March 15th through April 25th, Panarin went 8-18-26, plus-15, but he is without a point in his last two contests, his first games going consecutive games without a point since February 8th/10th.  Panarin is 2-7-9, plus-4, in six games against the Caps this season and 10-14-24, plus-9, in 21 games in his career against Washington.

Mika Zibanejad has had a strange year playing in Madison Square Garden.  In his first 14 games on home ice this season, he went 1-3-4, minus-6.  And then a light went on. A red light.  Three times.  On St. Patrick’s Day, Zibanejad went 3-3-6, plus-5, in a 9-0 plastering of the Philadelphia Flyers.  In the dozen home games he played that started with that outburst, Zibanejad is 8-12-20, plus-8, with two hat tricks.  It might not be a coincidence that in those first 14 games at home, the Rangers went 5-6-3 but are 9-3-0 in the dozen game since then on home ice.  It might be a coincidence, either, that the Rangers were just 11-12-4 in their first 27 games overall in which Zibanejad played, but are 15-8-2 in 25 games since.  It has been the difference between falling behind in the standings early and rushing frantically to catch up late, only to fail in that quest.  Zibanejad is 2-24, plus-2, in six games against Washington this season and 12-11-23, minus-4 over his career against the Caps.

With Jack Johnson out for the rest of the year with hernia surgery, defenseman Brendan Smith is now the old man in blue, the only active Ranger born in the 1980’s (February 2, 1989, for those keeping score).  Now in his tenth NHL season (five-plus seasons in New York after starting his career with the Detroit Red Wings), Smith has posted his second double-digit point total as a Ranger (5-5-10) and his best plus-minus rating in any of his five-plus seasons in New York and best of his career (plus-8).  His five goals have tied a career-best, set with Detroit in 71 games in 2013-2014, and his shooting percentage (8.8) is the best of his career. He is doing it while averaging just 16:27 in ice time per game, fifth among the six Ranger defensemen to dress for at least 20 games.

Although the Rangers have not had a lot of offensive input from defensemen at home outside of the Adam Fox-Ryan Lindgren duo, Smith does rank fourth in points among defensemen on home ice (six) and he is one of three defensemen with two or more goals at MSG this season (Fox and Jacob Trouba being the others).  Smith is 0-1-1, minus-2, in five games against the Caps this season and 0-5-5, minus-2, in 24 career games against the Capitals. 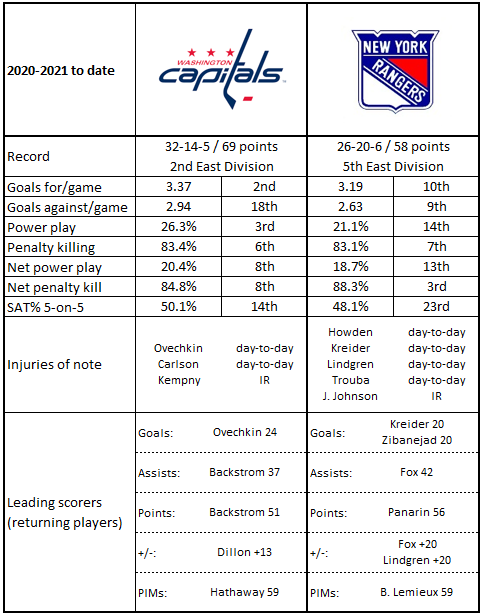 1.  The two New York area teams (Rangers and Islanders) have used a combined four goalies against the Caps this season.  All four are Russian – Semyon Varlamov and Ilya Sorokin for the Islanders, and Ilya Shesterkin and Alexandar Georgiev for the Rangers.

2. The Rangers have dressed 11 defensemen this season.  All of them have points, but four of them have only one (Jack Johnson, Tony DeAngelo, Tarmo Reunanen, and Zac Jones).

4.  The Rangers are 11-1-1 on home ice when scoring first, tied with Boston for the sixth-best winning percentage in the league (.846).

1.  The Caps lead the league in first period goals scored on the road (31).

The scouting report on Filip Chytil says that he is “an excellent skater with playmaking skills and a very good wrist shot. Is also tenacious on the forecheck and versatile enough to play both center and wing. Is also an asset defensively when he does not have the puck.  On the other hand, it also says that he “needs to bulk up significantly and get a lot stronger in order to maximize output in the North American professional ranks. Also needs more strength to win board battles and forecheck consistently in the NHL.”  His potential is “fast, talented and versatile forward with upside.”

In a game that has put a premium on speed, that asset should benefit Chytil and the Rangers, but speed on the forecheck without being effective at it can work against him.  And so here he is, in his fourth season with the Rangers, putting up career or near career offensive numbers (8-12-20, plus-8, in 38 games). And, there is a balance in his game.  He has been on ice for only 17 even strength goals in 38 games this season, and his plus-8 even strength goal differential on ice is tied for second-best on the club, trailing only Artemi Panarin (plus-15).

Since March 30th, Chytil has been a bit on offense, posting two three-game points streaks, but he posted only his first three-game streak without a point over that span in his last three contests.  He is 3-8-11, plus-6 overall over those 18 games.  Chytil is 1-0-1, minus-1, in four games against the Caps this season and 1-3-4, minus-3, in his career against Washington.

But now, he is a Capital.  And being on the other side of the ice, facing the Rangers, has not been kind to the Rangers over Hagelin’s career.  With Anaheim, Los Angeles, Pittsburgh, and the Caps, Hagelin is 6-7-13, plus-10, in 23 games against New York.  Only once has he endured as much as a three-game streak without a point against the Rangers.  That, of course, would be as a Capital.  Still, he is 3-2-5, plus-5, in 10 games against the Rangers as a Capital, and that is good production for a player getting bottom-six minutes.  What stand out in those number is the three goals on 16 shots, an 18.8 shooting percentage, considerable better than his 7.9 percent career shooting percentage overall.

With only five games left in the regular season, we are going to see if the Caps will “run through the tape” or coast to the finish.  Since their 14-game points streak back in mid-February to mid-March, they are 12-8-1.  Good, not great, but they are 7-4-0 on the road in that span, which is a decent result.  The Rangers provide an interesting test for the Caps.  They have been an annoying presence, going 4-2-0 in the six games against the Caps, and even the two Caps wins each were by a single goal (all of the Ranger wins were by multi-goal margins).  How the Caps do in this test might be an early indicator of their frame of mind heading into the playoffs.