Week 16 was a marching-in-place week for the Washington Capitals and gave support to the old adage, if you are not moving forward, you are falling behind.  And that is what happened, as the Caps fell two points behind the Pittsburgh Penguins at week’s end to relinquish the top spot in the East Division, although they still hold a game in hand on the Pens. 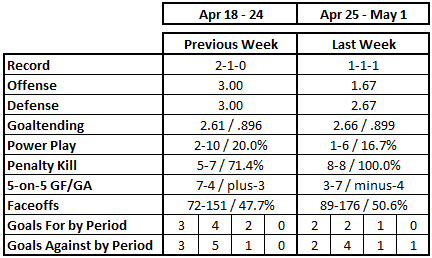 Week 16 was the third week in the last five in which the Caps finished in break-even fashion.  That 10-7-1 record over those five weeks is tied for 12th in standings points earned and 15th in standing points percentage.  It mattered as well what the status was of opponents – 4-5-1 against playoff eligible teams, 6-2-0 against the also-rans.  And home ice has not been home sweet home, either.   Over those last five weeks, the Caps are 3-3-1 at Capital One Arena and 7-4-0 on the road.  Having the fourth-best home record in the East is not the most urgent issue on the list of things to attend to, but it should not be ignored, either. 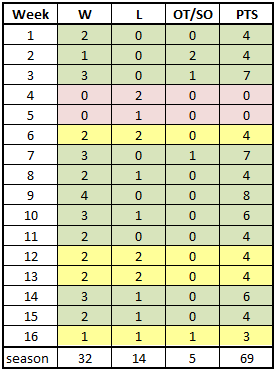 Much has been made of the Caps’ success when Alex Ovechkin is not in the lineup – 3-0-1 this season before he missed the April 24th game against the New York Islanders, a game the Caps won, 6-3.  But his absence for all three games in Week 16, coupled with that of John Carlson, who missed both games against Pittsburgh to close the week, was felt in the team offensive statistics.

The Caps scored five goals in three games, four of them in an overtime loss to the Penguins in the middle game of the week.  Four Caps shared in the goal total, Daniel Sprong being the only skater with two goals.  Seven Caps recorded points, led by Nicklas Backstrom (0-3-3) and Dmitry Orlov (1-2-3).

It was a close to average week for goaltending for the Caps, and that is not necessarily a good thing.  Vitek Vanecek continued his struggles with consistency, and Ilya Samsonov, who has been given a lot of chances lately to grab the number one role by the throat, loosened his grip somewhat.  Vanecek had a shutout and a five-goal game, which has become something of a disturbing pattern of late.  In his last eight games he allowed four or more goals three times and one or fewer goals four times.  This provides little confidence than he can provide consistently good (not even elite) netminding when the schedule comes down to seven-game series in a couple of weeks.

As for Samsonov, he had a four game personal winning streak broken, but even with the 4-1-0 record in his last five games, his save percentage were, in order (from least to most recent), .967, .880, 1.000, .975, and .885.  He, too, is having the sort of struggles with consistency that call into question whether he can raise his game in a seven-game series to a more consistent level.

Six chances in three games.  Power plays are likely to be fewer in number for everyone when the playoffs start, but the lack of them for the Caps has been a season-long issue.  Their 2.69 power play chances per game rank 26th at week’s end, and only the New York Islanders among currently playoff eligible teams have fewer (2.67/28th).

The Caps were very average in efficiency in the chances they did get, scoring one goal on seven shots in 8:56 of power play time. On the other hand, they recorded five of those shots in a single game, getting five in 4:12 of power play ice time in the 5-4 overtime loss to the Penguins in the middle game of the week.  T.J. Oshie was the only Capital with more than one shot on goal with a man advantage, getting two to the five total shots.  In this area, Ovechkin was missed, if only for the pressure he puts on defenses to be aware of where he is. 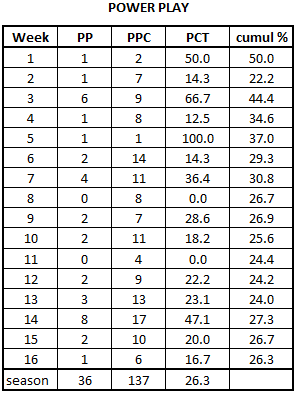 The best area for the Caps in Week 16.  The number of shorthanded situations faced was manageable – 2.67 per game (slightly below their 2.96 season average), the Caps were efficient (six shots allowed in 16 minutes of shorthanded ice time).  It was the fourth perfect week on the penalty kill this season and the instance with the most shorthanded situations faced.  They also accomplished this by shutting out the league’s tenth best power play, twice (Pittsburgh).  After three weeks of declining penalty killing efficiency, it was a welcome development. 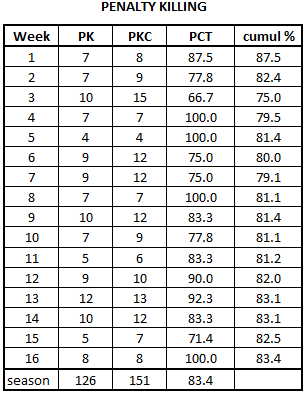 It was a decent week for the Caps in the circle, even recognizing that they finished it one faceoff win over 50 percent. “Decent’ is used to describe it because it is a bit misleading.  The Caps won 60.4 percent of their faceoffs against the New York Islanders to start the week, but they were under 50 percent in each game against Pittsburgh (49.3 percent in the overtime loss and 43.4 percent in the last game of the week).  The was also the difference it the ends.  The Caps won 54.0 percent of their defensive zone draws, but they managed only a 48.4 percent winning percentage in the offensive end. 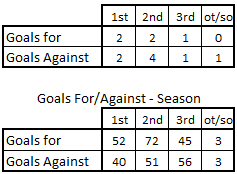 The Caps are two wins short and two loss in regulation greater than last year’s club, a four-point difference.  Not a lot there.  The scoring offense and defense, on a year-to-year basis are not all that different, either (one goal in 51 games in scoring defense).  The Caps have had a considerable drop on both sides of special teams in number of chances, in both power play and penalty kill more than 15 percent fewer chances this year over last. 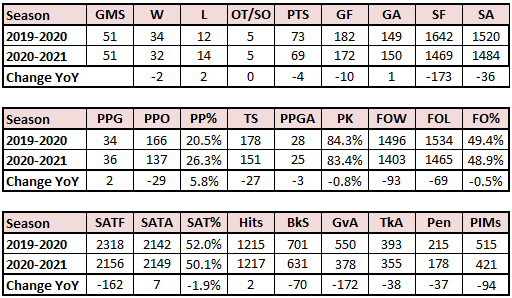 It is hard to tell whether the Caps are limping or coasting to the finish.  Missing Alex Ovechkin and John Carlson is a significant loss on the offensive side of the puck, but on the other hand, the Caps looked less intense than one might have expected in the two games against Pittsburgh. This might be an issue going into the last full week of the regular season, as the Caps have already clinched a spot in the top four in the East.  And, they play four of their last five games against teams out of contention – twice against the New York Rangers and a pair against the Philadelphia Flyers – before wrapping up the regular season against the Boston Bruins.  The concern here is that the 1-1-1 week not only left the Caps in second place in the division, but that they are only three points ahead of fourth-place Boston, which holds a game in hand.  The games to come are not a win-or-go-home matter, but they do matter nonetheless.  And that is a product of a somewhat disappointing Week 16.