Alex and Nastya and Nicky Make a Commericial...The Cousins Weigh In

If you haven’t seen it, take a moment and take a peek at what might be the greatest hockey commercial of all time…


In the ad for MassMutual, we get a glimpse of “At Home With the Ovechkins,” starring Alex Ovechkin, his wife Nastya, and long-time sidekick Nicklas Backstrom.  The cousins spent the better part of the morning watching the half-minute ad and have some opinions on the production.

Fearless… Let me just say, this commercial can take its place among the iconic ads of all time, the “Energizer Bunny” ads, the “Where’s the Beef” ads, the “Please Don’t Squeeze the Charmin” ads.  Ovechkin can now lay claim to being “The Most Interesting Man in the World,” replacing the spokesperson for Dos Equis beer (who was born in the Bronx…what’s up with that?)  This ad might be the greatest ad featuring food since the Alka Seltzer “I can’t believe I ate the whole thing” ads more than 50 years ago.

Cheerless… I’m gonna be hearing Backstrom slurping his cereal milk in my dreams.

Feerless… There is also the setting, the ratings of which have become something of a thing on social media.  In that spirit, take a look at the scene. 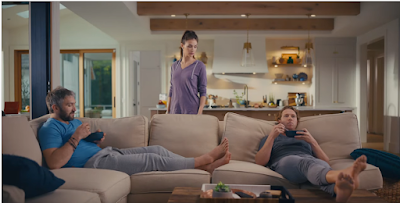 Ovechkin and Backstrom are enjoying a leisurely breakfast on a sofa that looks like one you would find in any family room, not of the sort that would be more for display purposes that you would never sit on, let alone enjoy a meal on…

Cheerless… Are they eating “Ovi-O’s” or some weird granola nuts and twigs stuff that Brooks Orpik might eat?

Fearless.. as we were saying, there is the natural lighting, a scene conducive to a relaxed, completely in tune with an unhurried breakfast.  And the tasteful display on the counter in the background, not cluttered with cliché hockey memorabilia.  This is a setting that deserves a 10/10 on the room rater scale, perhaps an 11.

Cheerless… Are Ovechkin and Backstrom wearing matching sweatpants?  And the barefoot look.. they’d be right at home in my cabin knockin’ back some moonshine and eating possum nuggets.

Fearless… You also have something of the sitcom formula in this ad, with Ovechkin playing the goodhearted galoot, concerned about his friend if something should deprive Backstrom of Ovechkin’s partnership on the ice.  Meanwhile, Nastya is clearly the head of the household, calling Ovechkin to task about his life insurance policy and noting with a hint of annoyance Backstrom’s regular appearances at breakfast in the Ovechkin household.  She maintains the order.  Backstrom has but one line in the ad, but it is a moment that might qualify for an Oscar or Emmy award if delivered in the movie or TV media…

Cheerless… Yeah, and the slurpage is a nice touch.  Reminds me of…well, me.

Fearless… The timing of the delivery of Ovechkin and his wife is impeccable. You can almost imagine yourself sharing a weekend brunch with this couple.  And Nastya's performance is worthy of "best newcomer in a video ad" consideration.

Cheerless… eating a bowl of Ovi-O’s?

Fearless… unless you’re into that granola nuts and twigs thing.

Cheerless… bet Orpik would pour organic free range oat milk on his nuts and twigs, too.

Fearless… Getting back to the topic at hand, it is obvious that Ovechkin is a natural in filming ads, part of a long history of making commercials, from his turn with Ted Leonsis…


...to his playful prank on Sidney Crosby…


…to his “James Bond villain” moment on ESPN…

Fearless… You have to hope that “At Home With the Ovechkins” will be a series featuring cameos from teammates and opponents.

Cheerless… Think they’d invite us to do an episode?

Fearless… Hee-yeah…right.  When Backstrom gets off the couch.