The Peerless Prognosticator is ON THE AIR!!! -- Game 2: Lightning at Capitals. October 16

“Measuring Stick Week” continues for the Washington Capitals when they host the defending Stanley Cup champion Tampa Bay Lightning on Saturday night.  The Caps had their first “measuring stick” game against a team – the New York Rangers – they are likely to be battling all season for a playoff spot.  This game against the Lightning gives the Caps a chance to measure themselves against the elite of the elite.

The Caps will go into this game fresh off a 5-1 thumping of the New York Rangers, while the Lightning come to DC with what might be a Stanley Cup hangover.  They lost their opener – a banner-raising night – to the Pittsburgh Penguins, 6-2, a game closer than the score might indicate given that the Pens scored three empty net goals.  The Lightning followed that up with a less than impressive 7-6 overtime win over the Detroit Red Wings.

The Lightning do have scoring balance through two games with three players sharing the team lead in goals with two apiece – Steve Stamkos, Ondrej Palat, and Alex Killorn.  Stamkos and Victor Hedman lead the team with five points apiece.

The flip side of balance, though, is that Tampa Bay has only one “plus” rated player to date, Braden Point being a plus-1.  Twelve of the 19 skaters to dress so far are in minus territory, Mikhail Sergachev being a minus-7 through two contests.

It is quite a different start for the Bolts, who started last season 3-0-0, outscoring opponents by a 13-5 margin after coming off a Stanley Cup win. 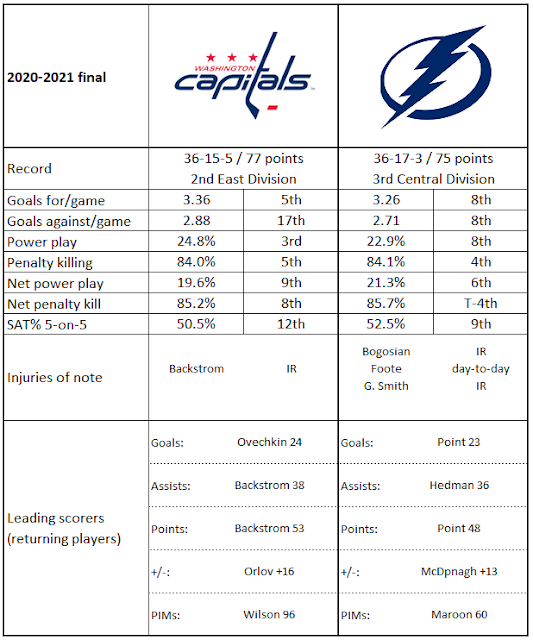 1.  Tampa Bay is tied with another Stanley Cup hopeful, the New York Islanders, with the third-worst scoring defense to date (6.00 goals per game allowed).

2.  The Lightning have allowed ten goals at 5-on-5, most in the league.

3.  Through two games, the Lightning have not led at any point in those contests (their game winning goal against Detroit came in overtime after they erased a three-goal deficit).

4.  Tampa Bay is getting contributions from their top-line players, but the secondary tier is lacking so far.  Pat Maroon, no points. Ryan McDonagh, no points. Core Perry, no points.

5.  It’s early, but no Lightnng player has hit a post or a crossbar yet.

3.  Only one of the Caps’ five goals in the opener was scored at even strength, that by Hendrix Lapierre.

4.  Tom Wilson had two takeaways and only one hit in the opener.

5.  The Caps haven’t hit a post or a crossbar yet, either.

Fifty-eight shots faced, nine goals allowed, a .845 save percentage.  It is close to a betting certainty that the save percentage for Lightning goaltender Andrei Vasilevskiy will not linger long under .850, but it is unusual.  In none of his 42 appearances last season did he finish a game with a save percentage under .850, and only 13 times was it under .900.  He had five regular season shutouts and five more in the postseason.  He finished second to Marc-Andre Fleury in Vezina Trophy voting, but was named a first team All-Star and won the Conn Smythe Trophy as most valuable player in the postseason.  Every goalie goes through tough stretches, and this might be Vasilevskiy’s for the season.  And it isn’t as if Vasilevskiy is in a position of having to play through the rough spots.  The Lightning have one of the better goalie tandems in the league, having added Brian Elliott to the roster this season.  But if there is one player who needs to play at an elite level more – a lot more – than not it s Vasilevskiy.  He being arguably the best goalie in the league, his performing at that level versus not is the difference between Tampa Bay being an odds-on favorite to make it three Stanley Cups in a row and being one of many who could win the Cup, but not necessarily a favorite to do so.  Vasilevskiy is 4-6-1, 3.70, .897 all-time versus the Caps.

It was only one game, but Capitals Nation had to be encourage at the engagement level and performance of Evgeny Kuznetsov in the Caps’ season opener.  Three assists (two on the power play, one shorthanded), no giveaways, plus-1, and a team high 21:22 in ice time.  It was a fine night for a player who has to raise his game in the absence of Nicklas Backstrom.  He goes into the game against the Lightning with points in seven consecutive games against the Bolts (2-9-11, plus-2).  He has points in 12 of the 20 career games he has against Tampa Bay.  Kuznetsov got off to an uneven start last season, failing to record a point his first two games before peeling off a three-game points streak.  That was followed by three games without a point, two straight with points, and another four without one.  Thre-point nights are not likely to be the norm for Kuznetsov, but if he would be more consistent in his performance, he might resemble the Kuznetsov of 2017-2018 (21-51-72, plus-7) and perhaps similar postseason results – a Stanley Cup.  Kuznetsov is 3-11-14, minus-1, in 19 career games against Tampa Bay.

It is one game out of 82, and not a divisional one at that.  But the Caps are a team with new parts, injecting youth, and trying to squeeze another productive season out of an aging core.  They face a team in its competitive prime, looking to become the first team since the New York Islanders to win three Cups in a row (1980-1982; they added a fourth consecutive Cup in 1983).  Following up their dominating Opening Night win over the New York Rangers with a similar effort against the Lightning would send signals that the Caps are a team to be reckoned with. This contest will be a useful measuring stick to see where the Caps stand as a team that is embarking on a transition of sorts, with youth providing spark and production in addition to their storied core.