The Peerless Prognosticator is ON THE AIR!!! -- Game 23: Capitals at Panthers: November 30

The Washington Capitals wrap up their first regular season series when they visit the Florida Panthers on Tuesday night.  The teams split the first two meetings, the Panthers earning a 5-4 overtime win on November 4th in Florida, and the Caps evening the series with a 4-3 win last Friday in Washington.  The Caps head into this matchup winners of three straight and nine of their last 11 contests (9-1-1).  Florida has lost two in a row, including that 4-3 loss to the Caps, after winning four straight.

Florida has been almost unbeatable at home so far.  Their 11-1-0 record at BB&T Center is the best in the league to date.  Much of their success is due to offensive balance.  Sixteen of 24 skaters to dress for home games have goals for the Panthers. While that might be particularly special, their having 11 multiple goal scorers and five with at least five goals in 12 games on home ice qualifies.

Anthony Duclair leads the Panthers with seven goals in 11 home games to date.  Duclair is a tantalizing player in some respects, a player who gave occasional hints that he would be a scorer to be reckoned with.  There were his 20 goals in 81 games in his first full NHL season, in 2015-2016 with Arizona.  He slipped to five goals in 58 games the following season, but he improved his production in each of the next three years, capped with a 23-goal season (in 66 games) in 2019-2020 with Ottawa.  He slipped a bit once more with ten goals in 43 games last season, but he has nine in 19 games overall to start this season, a 39-goal pace.  That would not seem to be a sustainable pace, given he is shooting 25.7 percent, more than six points better than his best season to date (19.0 percent in 2015-2016) and more than double his career shooting percentage (12.3) coming into this season. The Panthers could use his continued production, the team being 7-0-1 in the eight games in which he has a goal this season.  Duclair, who is listed day-to-day with an injury, is 3-3-6, minus-6, in 12 career games against the Capitals.

While Duclair leads the Panthers in goals scored on home ice, defenseman Aaron Ekblad is tied for the lead (with Duclair) in points scored in home games so far – 13 points in 12 games.  Ekblad has not been an elite offensive contributor, but he has been the epitome of consistency.  Starting with his Calder Trophy rookie season, Ekblad has double digit goal totals in six of seven seasons coming into this year and more than 35 points in five of those seven seasons.  He started this season on a pace for a career year, his 6-11-17, plus-16 overall scoring line working out to a 23-43-66, plus-62 pace over 82 games.  All would easily clear his career bests in those categories (16 goals in 2017-2018, 36 assists in 2019-2020, 41 points in 2019-2020, and plus-18 in 2015-2016).  Ekblad had a five-game points streak snapped in the loss to the Caps last week and is without a point in his last two games.  Ekblad is 2-3-5, plus-2, in 18 career games against Washington.

Florida has had little need for dependence on rookies for contributions, only three rookie skaters dressing for the Panthers to date.  Anton Lundell, however, has had a solid start in his rookie campaign, posting a 3-4-7, plus-2, scoring line in 11 games.  Lundell was the 12th overall pick in the 2020 Entry Draft and has outperformed his draft position so far, ranking seventh in his draft class in games (17), seventh in goals (three), sixth in assists (four), tied for sixth in points (seven), and tied for third in plus-minus (plus-2).  Florida is 4-0-1 when Lundell recorded at least one point, but as is the case with many rookies, less ice time is associated with better win-loss results.  Florida is 6-1-2 when he logged 16:57 or less in games, 5-3-0 when he logged more than that.  Lundell is without a point and has an even rating in his two career games against the Caps to date. 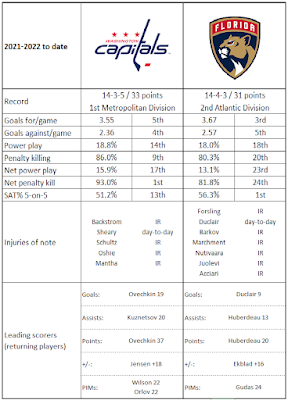 1.  Florida’s plus-2.00 goal differential on home ice is best in the league.

2.  The Panthers are a high-volume event team on home ice, the combined 69.9 shots on goal/shots allowed being most in the league.

3.  One thing the Panthers cannot do on home ice is win faceoffs.  Their 45.7 winning percentage is second-worst in the league (Buffalo: 45.3 percent).

4.  Florida’s plus-11 goal differential in first periods of games at home (18 goals for, leading the league) is best in the league.

2.  Washington is second in the league in first period goals scored on the road with 13 (Calgary: 19).

4.  Washington is one of four teams without a loss in regulation on the road when being outshot (4-0-1).  Boston, Carolina, and St. Louis are the others.

The question in goal for the Capitals as they work through the second quarter of their regular season schedule is, “has Ilya Samsonov turned the corner?”  Samsonov went 29-10-3 in his first two seasons with the Caps, but his underlying performance (2.61/.908) suggested “passenger,” not a goalie to lean on who would steal games.  With the emergence of Vitek Vanecek as a credible alternative as the number one goalie, coupled with Samsonov’s on and off ice adventures (injuries/COVID), Samsonov’s future with the team seemed uncertain.

Even his first half-dozen games this season provided little in the way of confidence.  He was 4-0-1, but he also had a 2.93 goals against average and a .894 save percentage. These were not the numbers of a goalie with Stanley Cup aspirations.  However, in his five appearances he is 5-0-0, 1.60, .942, with two shutouts.  That is a small sample of game from which to draw specific conclusions as to his future this season, but the numbers are encouraging, and the eye test suggests he is feeling more confident and comfortable in the position.  At last, he might be grabbing the job of number one goalie by the throat and holding it tightly.  Samsonov is 1-0-0, 4.21, .850 in two career appearances against Florida.

The Caps had the better of play against Florida in Washington in their last meeting, but Florida in Florida seems to be a different animal entirely.  For the Caps to plant the first regulation loss on the Panthers in their rink, they will have to play as close to perfect a road game as possible – simplified, focused, relentless, 60-minutes of effort.  But this is a team that is 7-2-2 on the road, the fourth-best road record in the league.  Do we hear “eight wins?”