The Peerless Prognosticator is ON THE AIR!!! -- Game 24: Blackhawks at Capitals: December 2nd

The Washington Capitals begin their longest home stand of the season – four games – on Thursday night when the Chicago Blackhawks blow in from the Windy City.  The Caps will be looking to rid themselves of the stench of the third period in Tuesday’s game against the Florida Panthers, when they coughed up a 4-1 lead, allowed four goals (the last with 15 seconds left), and lost without so much as salvaging a single standings point in a 5-4 loss.  Chicago has alternated wins and losses over their past six games overall (3-3-0).  They are 2-2-0 in their last four road games after going 0-5-1 in their first six road contests.

Patrick Kane is the only number one overall draft pick in Chicago Blackhawks history.  He has had a much better career than the Blackhawks’ only number two overall pick in their history – Andrew Culligan (1965 Amateur Draft) -- who never dressed for an NHL game.  Kane is fourth all-time in franchise history in games played (1,046), third in goals scored (410), third in assists (696), third in points (1.106), fourth in power play goals (113), tied for third in power play points (355), second in overtime goals (nine), third in game-winning goals (67), second in ice time per game among forwards (20:13), second in takeaways (632), fourth in first goals of games (69), first in empty net goals (25), and second in both Gimmick goals scored (47) and game-deciding Gimmick goals (19).

It might seem like it should be more, but Marc-Andre Fleury has 42 career regular season appearances against the Caps, the same number, it turns out, and another Capital nemesis and erstwhile teammate (sort of) – Henrik Lundqvist.  The two have very similar career records against the Caps, Fleury with a 24-14-2/2.62/.911/four shutout record, and Lundqvist with a 22-13-7/2.76/.907/4 shutout record.  And Fleury has faced the Caps only three times in the postseason.  It just seems his footprint as an opponent in Caps history is larger than the numbers suggest.  Perhaps it is that Fleury faced the Caps in two seven-game series (both wins with Pittsburgh) and another of five games (the Stanley Cup final in 2018, a Caps win).  There might not be another opposition goalie in the Rock the Red era for the Caps who is remembered more by Caps fans. 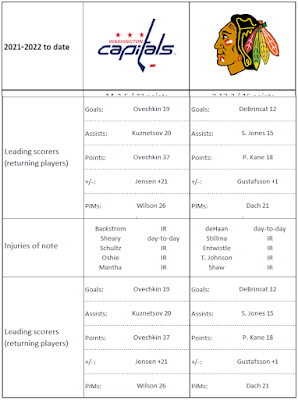 1.  Chicago has difficulty getting pucks on net on the road.  Their 24.5 shots per game are fewest in the league.

2.  The Blackhawks find themselves behind the eight-ball early in games.  They have been scored upon first in seven of ten road games (0-6-1 record), tied for third-most in the league; and they have trailed seven times at the first intermission (0-6-1).

3.  Perhaps allowing 20 first period goals has something to do with those early-game woes – most in the league by far (Vancouver: 14).

4.  Chicago plays well within the rules on the road.  Their net penalties (drawn less taken) of plus-4 and their 0.40 net penalties per 60 minutes rank second in the league in both categories.

5.  The Blackhawks are adept at pilfering pucks, their 7.98 takeaways per 60 minutes ranking third in the league.

1.  Washington is one of only four teams with a single loss in regulation on home ice (New York Rangrs, Edmonton Oilers, Florida Panthers).

2.  The Caps’ plus-1.46 goal differential on home ice is fourth-best in the league.

4.  The Capitals have six wins when scoring first on home ice, tied for second-most in the league (Florida: seven).

5.  Washington needs to do better in close games on home ice. Their 1-1-3 record is tied for fourth-worst in the league by points percentage (.200).

Back in 2016, a well-regarded Capitals Web site selected Alex DeBrincat with the 26th overall pick of the 2016 Entry Draft.  The Capitals did not take the advice.  Instead, the Caps traded the 26th pick to St. Louis for the Blues’ first round pick (29th overall) and a third-round pick (87th overall).  The Caps took Lucas Johansen with the first round pick and Garrett Pilon with the third round pick.  Johansen has not yet played an NHL game and has spent the last five seasons with the Hershey Bears.  Pilon broke through and dressed for his first NHL game last season and has played two this season for the Caps.  The two have combined to go 1-0-1, plus-1 (all from Pilon) in the NHL.

DeBrincat slipped to the second round of the 2016 draft where he was taken by the Blackhawks, perhaps his size (5’7”/165 pounds) working against him.  The 39th overall pick has been a bargain – sixth in his draft class in games played (307), third in goals scored (131), sixth in assists (113), fourth in points (244), third in power play goals (41), fourth in power play points (74), second in overtime goals (seven), and fourth n game-winning goals (17).  This season, DeBrincat has taken over as the dominant offensive force for the Blackhawks, leading the team by a wide margin in goals (12, to Brandon Hagel’s seven) and is second in points overall (15, to Patrick Kane’s 18).  He and Kane lead the team in game-winning goals (two apiece; the team has only six overall), he trails only Kane among forwards in team goals for at even strength (15, to Kane’s 16).  On the other hand, though, he has been on ice for 20 even strength goals against, most among forwards.  DeBrincat is 2-2-4, plus-1, in five career games against the Caps.

Of all 355 active players having faced the Blackhawks in ten or more games, who has more points per game against Chicago than Logan Couture, Max Pacioretty, Filip Forsberg, or Phil Kessel?  Carl Hagelin, that’s who.  With eight points in 13 career games against Chicago (0.62 points per game), he has more than Couture (0.61), Pacioretty (0.61), Forsberg (0.58), and Kessel (0.55). Hagelin is one of 12 players in that group to have posted two shorthanded points.  Hagelin also averages 16:24 in ice time per game against Chicago over his career, more per-game ice time than he has against any other team except the Minnesota Wild (16:47 in 13 games).

Hagelin could use some of that production at the moment.  Never an especially noteworthy scorer – his best points per game was in 2011-2012 with the New York Rangers (0.59), and his career average coming into this year was 0.43 – his scoring this year has been disappointing, even by modest standards.  Hagelin has three assists in 23 games and is looking for his first goal, going 0-for-28 shooting.  He is one of seven forwards in the league without a goal and having taken 28 or more shots.  He and Zach Parise are tied for fewest points in than group (three).  On the other hand, Hagelin leads that group in plus-minus (plus-4), which is more evidence of the Caps’ overall strength than Hagelin’s performance.  He is 2-6-8, minus-1, in 13 career games against Chicago.

Good veteran teams do not let one bad period linger in the mind, especially when they dominated the two periods preceding it, as the Caps did against Florida in their 5-4 loss on Tuesday.  And they don’t let a team that is 2-7-1 on the road add to the recent misery.  The Caps, that third period notwithstanding, are a good – a very good – team. Chicago is not.  This should not be close.