The Peerless Prognosticator is ON THE AIR!!! -- Game 42: Senators at Capitals, January 22nd

The struggling Washington Capitals open the second half of their regular season schedule on Saturday night when they host the Ottawa Senators at Capital One Arena.  The Caps lost a tough battle with the Boston Bruins in the last minute of regulation, 4-3, on Thursday night, while the Senators arrive in DC from Pittsburgh, where their comeback on Thursday from a 6-1 deficit came up short, 6-4.

While the Caps have struggled, going 2-4-2 in their last eight games, the Senators are trying to dig themselves out of an early hole.  After going 4-15-1 in their first 20 games, they are 7-5-1 over their last 13 games.

What Ottawa has done since their slow start is ramp up their scoring offense significantly.  In that 4-15-1 start, they averaged just 2.40 goals per game, 27th in the league.  But in their 7-5-1 run since then, they are averaging 3.46 goals per game, tenth in the league.  One player who has caught fire in the recent run is left winger Alex Formenton.  In his first 17 games corresponding to Ottawa’s 18-game start, he went 2-1-3, minus-9.  But in 13 games since then he is 5-7-12, plus-6, that plus-minus rating being tops on the team in this stretch of games.  Formenton was drafted in the second round of the 2017 Entry Draft by the Senators (47th overall) out of the London Knights organization in the Ontario Hockey League.  In 141 games over three seasons with the Knights he went 57-56-113, plus-39.  He had brief stints with the Senators in the three seasons preceding this one – 30 games overall – before taking on a full-time role this season.  His shooting efficiency has picked up markedly from that first split of games to the most recent one, shooting at 7.1 percent in his first 17 games and 17.2 percent in his last 13 games.  He comes into this game with five multi-point games in his last 13 games.  Formenton is without a point and has a minus-2 rating in one career appearance against the Caps.

One player who seems to have regressed from the slow start to the better team performance of late is a name Caps fans will recognize.  Zach Sanford did not exactly burn out bulbs on the scoreboard, points-wise, in the Senators’ slow start, registering six points in 20 games, but five of those point s were goals, tied for third on the club after 20 games.  Since then, though, he is 1-2-3 in 13 games.  Sanford was the last pick of the second round (61st overall) by the Capitals in the 2013 Entry Draft.  His development since then has been uneven.  He reached the NHL in 2016-2017 and played in 26 games for the Caps, going 2-1-3, even, before he was traded with a first round draft pick in 2017, a conditional second round draft pick in 2019, and Brad Malone to the St. Louis Blues for Pheonix Copley and Kevin Shattenkirk.  He spent three seasons and change with the Blues, posting a decent, if not extraordinary scoring line of 36-35-71, plus-10, in 183 games.  He was traded by the Blues to Ottawa for a conditional fourth round draft pick in 2022 and Logan Brown.  After an 11-game streak in which he went without a point and was mnus-9, he has points in three of his last six games with an even rating.

Not that the Senators are in a position to reach the postseason and have one of their goalies grab the position by the throat, but none of the three goalies to dress for the team this season have distinguished themselves.  Anton Forsberg (6-6-1, 3.17, .907, one shutout), Filip Gustavsson (3-8-1, 3.80, .892), and Matt Murray (2-6-0, 3.41, .892) have had their opportunities, but none have taken a firm grip on the number one spot.  Murray is currently day-to-day with a non-COVID illness, so it would seem that one of Forsberg or Gustavsson will get the call on Saturday.  Forsberg does have the charm of recent success, going 5-2-1, 2.52, .921, with one shutout in his last nine games (one no-decision).  On the other hand, Gustavsson has lost his last five decisions, with a 4.92 goals against average and a .859 save percentage and allowed five or more goals in three of those games.  Neither have a record of distinciton against the Caps, at least in a good way.  Forsberg is 2-1-0, 5.05, .846, in four appearances against the Caps, while Gustavsson is 0-1-0, 4.37, .800, in his only career appearance against Washington. 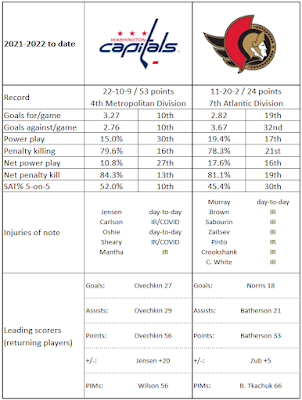 4.  The penalty kill improvement for the Senators from their poor start (73.4 percent/28th in the league) to their most recent 13 games (85.7 percent/fifth) has been dramatic.

2.  Washington has allowed three or more goals in 11 of their last 12 home games.  Only against Columbus (a 3-1 win on December 4th) did they allow fewer.  The allowed four or more in four of their last seven home games.

3. In four home games in January, the Caps’ penalty kill is 61.5 percent, 27th of 29 teams with penalty kill situations on home ice.

4.  Nicklas Backstrom is the only one of six Capitals to have taken at least 100 faceoffs and have a winning percentage over 50 percent (56.3).

5.  In January, three Caps have played at least five games and have a positive even strength goal differential – Martin Fehervary (plus-3), Aliaksei Protas (plus-3), and Brett Leason (plus-1).  Anyone think this is particularly odd...and troublesome?

Who is Drake Batherson, you ask?  No, not a character in “Gone With The Wind.”  He is Ottawa’s leading point producer so far this season (12-21-33), and his plus-4 rating is best among Senator forwards. Batherson was a fourth round pick of the Senators in the 2017 Entry Draft (121st overall) out of the Cape Breton Screaming Eagles organization.  In three seasons with Cape Breton, he was 39-60-99, plus-7, in 95 games.  He also spent two seasons with the Belleville Senators in the AHL, going 37-72-109, plus-29, in 90 games.  Batherson got his shot with the Senators in 2018-2019 and appeared in a total of 43 games in that and the following season before getting a larger role in 2020-2021 (17-17-34, minus-17, in 56 games).  Unfortunately for the Senators this season, they are only 4-4-1 in games in which he scored a goal and only 9-8-1 in the 19 games in which he recorded at least one point.  He has been consistent so far this season, averaging at least a point per game in each of the four months of the season to date.  Batherson has been an effective player on the road so far this season with points in nine of 14 games (including his last three road contests) and five multi-point games on the road, including a four-point effort (1-3-4) in an 8-2 win over Florida in December 14th. Baterson is 3-1-4, plus-3, in three career games against Washington.

It has not been the easiest of seasons for Capitals defenseman Justin Schultz, who lost three games to an upper body injury in late November and another pair of games to COVID at the end of December.  But ths has been an issue for Schultz over much of his career.  He appeared in more than 70 games in a season only once in six seasons preceding this one, and even in the last two seasons, the schedule for both of which was pared down, he missed 33 of 124 games.  Missing ten games last season, his first with the Caps, he was still 3-24-27, plus-12, in 46 games.  But his production is off so far this season (2-6-8, even, in 36 games).  There is, however, the matter of his being 1-4-5, minus-1, over his last eight home games, and with the Caps suffering a number of absences on the blue line (Nick Jensen to injury, John Carlson to COVID, and Dmitry Orlov serving the second of a two-game suspension), his contributions will be an important element in whether the Caps can send Ottawa on their way with a loss.  Schultz is 1-6-7, minus-6, in 15 career games against Ottawa.

Despite the Caps recent woes overall lately and their rather lackluster record at home (9-6-1 since December 1st), this is a game the Caps should win, even with their thinned out lineup.  The issue though, is solving confounding power play issues, a curious inability to maintain leads, and trouble scoring goals (17 goals in their last seven games overall).  No biggie, right?