The best that might be said of Week 14 for the Washington Capitals is that it was better than Week 13.  If optimism is your thing, you could say that a week that began with a disaster at home ended on a high note on the road.  Something to build on after a sluggish start to the new year. 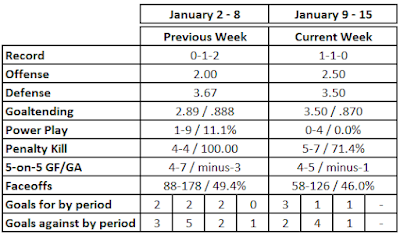 The Caps began the week extending a losing streak to four games (0-2-2), their longest losing streak of the season and longest since Games 10-13 last season, from February 1st through February 14th, also a four-game losing streak.  The seven goals that the Caps allowed ij a 7-3 loss to Boston to open the week were the most goals allowed to the Bruins on home ice since the Caps dropped a 7-2 decision to the B’s on October 30, 2002.  The loss to the Bruins extended a string of alternating wins and losses to five games (the Caps are 2-3-0 in that streak).

The Caps finished off their two-game week with a grind-it-out 2-0 win over the New York Islanders.  The shutout in the first meeting of the teams this season was the Caps’ second consecutive shutout of the Islanders, having blanked them, 1-0, in the third of three consecutive games played against the Islanders late last season.  It was the third time in four games against the Isles that the Caps recorded a shutout, beating them in a 1-0 Gimmick win last April 22nd in the first of those three consecutive games to start the run of stinginess. 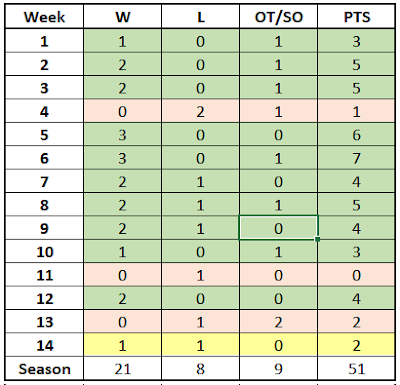 It was not a particularly good week on the offensive side of the puck for the Caps, who managed four goals against goaltenders and an empty netter to end the 2-0 win over the Islanders to end the week.  Conor Sheary was the only Capitals with a multi-goal week, posting a pair in the 7-3 loss to Boston.  T.J. Oshie, Tom Wilson, and Alex Ovechkin (empty net) were the other goal scorers.

Sheary, Ovechkin, and Evgeny Kuznetsov were the only players with multi-point weeks, each posting a pair.  In all, nine players recorded points, none of them by a defenseman.

The odd part of the week might have been the Caps’ considerable advantage in shot attempts at 5-on-5.  They were plus-16 in attempts (60 for, 44 against) in the loss to Boston, which might be explained away as scoring effects.  The Caps were plus-22 against the Islanders (49 for, 27 against) in a dominating possession performance.

Before the Bruins torched the Caps for seven goals in the first game of the week, the Caps had not allowed more than five goals in a game, although they have done that six times, twice in an overtime loss, not including the Boston debacle.  It was the largest margin of defeat to the Bruins on home ice (minus-4) since the Caps dropped a 7-2 decision to the Bruins on October 30, 2002, a span of 33 games between those two games.

The Caps allowed 31 shots to the Bruins, only the second time in eight games that they allowed more than 30 shots (37 to the Devils on January 2nd).  In each of the other six games, including the game against the Islanders in which they allowed only 23 shots, they allowed fewer than 25 shots.  It allowed the Caps to finish the week having allowed the second fewest shots per game for the season overall (28.1), trailing only Carolina (27.8).

Reality can be cruel, and it hit Zach Fucale hard in the loss to Boston.  Having allowed one goal on 50 shots in his first three NHL appearances, he was abused by the Bruins to the tune of four goals on 16 shots in less than 28 minutes of work in the 7-3 loss.  It might be a blip, it might be a signal that he is coming back to earth in his performance, but he remains one of the feel good stories for the Caps so far this season, still with a .924 save percentage in 171 minutes of work to date, 12th in the league among 78 goalies with at least 150 minutes played.

Vitek Vanecek got the remainder of the work for the week, and it was a case of very “meh” followed by very good.  He allowed three goals on 15 shots in 32 minutes of relief in the loss to Boston, but followed that up with a 23-save shutout of the Islanders to end the week.  Vanecek has been the beneficiary of some stinginess by the Caps in shots allowed, the 23 he faced against the Islanders being the sixth time in 15 games in which he played the full contest that he faced 25 or fewer shots.  Even the shutout had an odd stinginess aspect to it.  Only once in the last 11 shutouts by Caps goalies did the goalie face more than 30 shots (Ilya Samsonov, 34 shots versus Los Angeles November 17, 2021), only twice faced more than 25 shots (Samsonov: 26 shots versus the Islanders on April 22, 2021).

The streak of two weeks with at least, well only, one power play goal came to an end in Week 14, and the four chances were the fewest of any week this season, albeit in only two games.  What is also concerning about the power play is the neighborhood in which the Caps reside with regard to shorthanded goals allowed.  While they did not allow one in Week 14, they have allowed five so far this season, tied for fourth-most in the league.  Of the six teams allowing five or more shorthanded goals, Los Angeles has the most efficient power play, if you can call a 24th ranked power play (16.7 percent) “efficient.”  The Caps (14.3 percent and five shorthanded goals allowed) are neither efficient scoring with the man advantage and have been leaky in defensing on the power play. As with most aspects of this week, the Caps were poor on the penalty kill against Boston (3-for-5) and better against the Islanders (3-for-3).  It was the first week the Caps allowed more than one power play goal since a disastrous four goals allowed in Week 10.  It also brought to an end a three-week streak without having allowed a power play goal (15-for-15).  John Carlson (6:09), Tom Wilson (5:48), and Martin Fehervary (5:04 were the three Caps logging more than five minutes of penalty killing ice time for the week. 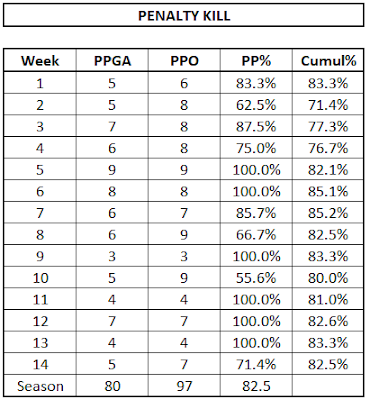 It is just a rinse and repeat cycle at this point, the Caps being a mid-40’s winning percentage on faceoffs.  And, they once more were consistently weak by zone, with 45.7 percent in the offensive zone, 43.9 percent in the defensive end, and 48.7 percent in neutral ice. Nicklas Backstrom was the only Capital taking more than ten draws with a winning week in the circle and was over 50 percent in all three zones while leading the team in faceoffs taken. 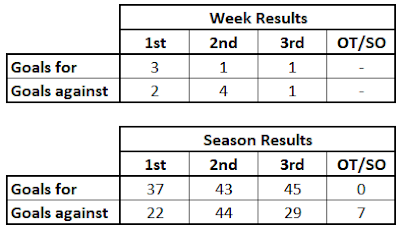 The Caps slipped a bit in year-over-year record compared to last season but are still only three standings points behind the pace set last season.  The defense, despite the seven goal ambush by Boston, remains ahead of last season by about a third of a goal per game, and this is reflected, too, in shots on goal, where the Caps have improved by a net 190 shots over last season, and in shot attempts at 5-on-5, where the Caps are up a net 217 attempts.  The power play this season is unrecognizable compared to last year’s at the 38-game mark, while the penalty kill is roughly equivalent. 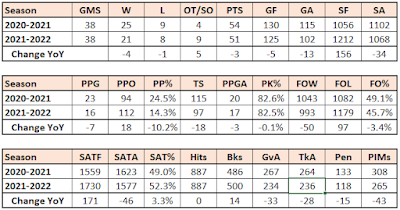 We are getting into the long dark winter of the hockey season, and the Caps seemed intent on getting a head start on the “dark” part with their loss to Boston.  The shutout of the Islanders was a gritty affair of the sort that the Caps have been on the short end of late, but they were stingy and opportunistic in grinding out a win against the Islanders.  Consistency is now Task 1 as the season moves forward, the Caps needing to marry effort to results if they are to regain the top spot in the Metropolitan Division.