The Peerless Prognosticator is ON THE AIR!!! -- Game 70: Lightning at Capitals, April 6th

The Washington Capitals return to the ice on Wednesday night to host the Tampa Bay Lightning at Capital One Arena, or as one might nickname it these days, given the Caps' record in their own rink,  “The Little Rink of Horrors.”  Meanwhile, the Lightning will face the Caps as a team looking to get off its own thrill ride of late, their recent record reflecting a roller coaster ride.

Tampa Bay has been a rather mediocre team over the last month, going 6-7-1 in 14 games since March 8th.  Their 13 points over that span are tied for 20th in the league, and their .464 points percentage ranks 22nd.  Offense has been an issue for the Bolts, whose 2.71 goals scored per game over those 14 games is the 26th-ranked scoring offense over that period.

What might be most odd about Tampa Bay’s offense over their last 14 games is that their leading goal scorer over those games is not Steven Stamkos.  It isn’t Nikita Kucherov.  It isn’t Braden Point.  It is defenseman Victor Hedman, who has six goals in that 14-game span.  It is the latest surge in what looks like a career year for Hedman in terms of his offensive numbers.  His 19 goals in 69 games to date is already a career high, surpassing the 17 goals he had in 77 games in 2017-2018.  His 47 assists are the second-highest of his career, trailing only the 56 helpers he had in 79 games in 2016-2017.  The 66 points he has to date is within striking distance of the 72 points he posted in 2016-2017.  Hedman already has a career best five power play goals and six game-winning goals.  And he is doing it while averaging 25:18 per game in ice time, 11th in the league to date and the second highest ice time log of his career (25:51 per game in 2017-2018).

Once upon a time, there was a player named Mike Keane, a player that the Stanley Cup seemed to follow around.  Over a seven-season period, from 1992-1993 through 1998-1999, Keane played on three different teams winning the Cup – Montreal in 1993, Colorado in 1996, and Dallas in 1999.  These days, the Cup seems to follow Pat Maroon around.  He has done Keane one better, playing on each of the last three Stanley Cup champions – St. Louis in 2019 and the Lightning in each of the last two seasons.  Maroon, who has carved out a career as mostly a bottom six forward, seems to be that “glue” that successful teams find to lend a measure of stability and timely production when games matter.

Coming into this season, Andrei Vasilevskiy could make a case that he is the best goalie in the NHL at the moment.  He was a Vezina finalist in each of the last four seasons preceding this one.  Of 53 goalies logging at least 5,000 minutes over the last five seasons, including this one, he ranks fifth in goals against average (2.46), fifth in save percentage (.921), and second in shutouts (24).  Of 50 goalies to appear in at least 100 games over the last five seasons, he is fifth in even strength save percentage (.927).  He has 184 wins over that span, most in the league by a wide margin (Connor Hellebuyck: 158).

He might be a longer shot to be a finalist this season with his statistical profile. Among 49 goalies logging at least 1,200 minutes, Vasilevskiy ranks first in wins (35), ninth in goals against average, 12th in save percentage (.917), and tied for 16th with two shutouts.  Of 57 goalies appearing in at least 20 games this season, he ranks 11th in even strength save percentage (.925) and is 25th in save percentage when shorthanded (.865).  He has had this season, if not a profound difference in his home and road performance, a clear difference in his home and road numbers once you get underneath his win-loss record.  Vasilevskiy is 18-7-3, 2.20, .921, with two shutouts on home ice, while on the road he is 17-8-1, 2.86, .909, with no shutouts.  While this is Vasilevskiy’s fourth 35-win season in his eight-year career, his 2.43 goals against average ranks squarely in the middle of his career rankings (fourth), as does his .917 save percentage (fifth best of his career).  By his standards, this has been a rather unremarkable season.  Vasilevskiy is 6-6-1, 3.34, .906, in 13 career appearances against the Caps. 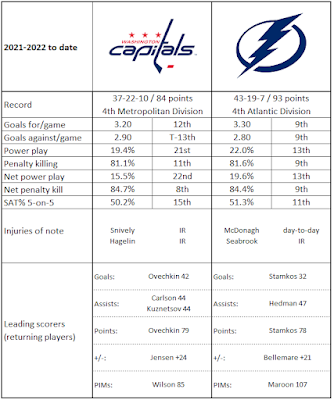 1.  Observers say that Washington is a veteran team. Look at Tampa Bay.  So far this season they used two rookie skaters – Taylor Raddysh and Boris Katchouk – and goalie Hugo Alnefelt for a total of four games combined.

1.  As much as the Caps have struggled at times this year, they do not get blown out often when compared to other teams.  They have nine losses of three or more goals, tied with Calgary for fifth-fewest in the league.

2.  On the other hand, the Caps have lost nine games in regulation by one goal, tied for third-most in the league with Vancouver and Columbus.

3.  Only Calgary has scored first in more games this season (44) than Washington (43, tied with Carolina and Colorado).

4.  The Caps have been reasonably responsible with the puck their 495 giveaways being seventh-fewest in the league this season to date.

5.  Only two teams have fewer losses when outshot by opponents than the Caps (six) – Florida (three) and Carolina (two).

In the Lightning’s recent 6-7-1 slide, nine of 22 skaters to appear in a least one game have failed to post a goal. The most surprising of this group is Ondrej Palat.  In his ten-year career, all of it spent with Tampa Bay, Palat has established himself as a consistent, reliable secondary scorer in a middle-six forward role.  In nine full seasons (he played in only 14 games in his first season), he topped ten goals eight time, and he recorded at least 15 goals seven times, including this season in which he has 15 goals.  Palat already has a career high in power play goals this season (seven) and is within one of his career high in game-winning goals (six, set last season).  His goal scoring this season has an odd dimension to it.  He has been quite productive on the road, posting 11 goals on 64 shots (17.2 percent shooting) in 33 games.  Home ice has been a different story with only four goals on 55 shots (7.3 percent shooting) in 31 games.

The 2022 portion of the schedule has been most unkind to Palat.  He started the new year with five goals in five games, including a four-game goal streak, but he suffered a lower body injury that kept him out for five games, and in 26 games since then, he has no goals on 40 shots.  Considering that the Lightning were 11-1-0 in the 12 games in which had goals before hitting that wall in January and the Lightning are just 15-9-2 over his slump (18th in points earned), it is production that has been missed.  Palat is 3-6-9, plus-1, in 17 career games against the Caps.

We have reached the “next” part of the season for defenseman Dmitry Orlov.  His next goal will be his 11th of the season, setting a new career high.  His next assist will be his 20th, giving him six 10-assist seasons, which would tie him with Larry Murphy and Sergei Gonchar for fifth place among defensemen on the all-time franchise list.  That next assist would also tie Orlov with Rod Langway for ninth place all time among defensemen in Caps history.  His next point will be his 30th, giving him three 30-point seasons, tying him with Robert Picard, Al Iafrate, and Matt Niskanen for ninth place on the all-time list among defensemen.  Orlov already has career highs this season in power play goals (two) and game-winning goals (four).

The Caps played two strong teams capable of deep playoff runs in their last two games, losing to Carolina and Minnesota by a combined 11-2 margin on home ice.  If the Caps were interested in making a statement, this was not the one they intended.  Now, they get to face the two-time defending Stanley Cup champs.  Tampa is not at its sharpest at the moment, but then again, neither are the Caps.  Washington is 4-10-0 in their last 14 home games, 7-14-1 in 22 games at Capital One Arena since December 10th.  If Washington has any hope of making any noise in the postseason, they have to improve – a lot – on home ice.  It will be a challenge to start that improvement against one of the league’s elite teams.