Washington Capitals: That Was The Week That Was - Week 27

The Washington Capitals had one of their more interesting weeks of the season, even if it looked a little Sisyphean at times.  The Caps took the boulder and started rolling it up the hill, beating a team ahead of them in the standings to open the week, rolled it up the hill a little higher by pasting an old rival, then watched it tumble backward as they were dominated in the first of two games in Canada, but ended the week with a big win in their last game north of the border this regular season. 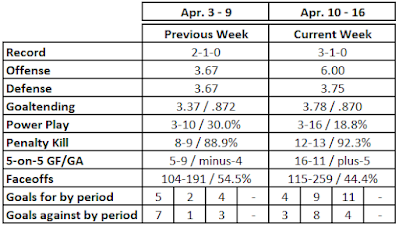 Three wins in four games is never a bad thing, and Week 27 was the Caps’ fourth three-win week of the season.  They did it in style, grinding out a fine win against the Boston Bruins in the first game of the week to stay on the heels of the first wild-card team in the standings.  They then torched the Philadelphia Flyers for nine goals for their second win of the week.  The Caps were brought to earth with a four-goal loss in Toronto that reminded them that a team with speed and offensive depth poses problems for an older, more physically-oriented team.  The week ended with a high note, though, with a convincing win in Montreal against a struggling Canadiens team. 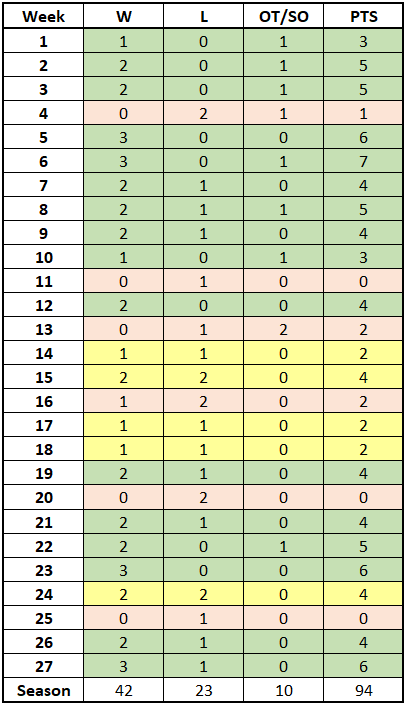 Twenty four goals in four games.  It was a deluge, a monsoon, a Category 5 storm raining goals on opponents.  The nine goals the Caps laid on the Flyers was the most by a Caps team against Philadelphia since they beat the Flyers, 10-4, on November 21, 1981, a game that might remembered for 38 penalties as much as the final score.  The eight goals they scored against Montreal four days later were the most by a Caps team against the Canadiens in 174 games of their all-time series (the Caps scored six against Montreal on occasions).  The 4-2 win over Boston seemed almost anemic by comparison, as did the three goals scored in a 7-3 loss to Toronto.

Fourteen different Caps shared in the 24 goals scored, led by Alex Ovechkin and Lars Eller with three apiece.  Eller and Anthony Mantha led the team with seven points apiece, two of 19 Caps (of 20 skaters playing for the week) to record at least one point – Connor McMichael was the only player not to record a point, but he appeared in only one game.

It was not as if the Caps shot lights out in terms of efficiency, either.  They did score those 24 goals on a total of 136 shots, but a 17.6 shooting percentage should be considered “above average” more than it should be considered “extraordinary.”  What was extraordinary was the Caps getting points from 16 of their 18 skaters in the 9-2 win over the Flyers.  Ten of them had multi-point games.  Only Nick Jensen and Marcus Johansson were held off the score sheet.  In the 8-4 win over Montreal, it was not as much sharing of the load as much as players having career games.  Dmitry Orlov posted the first four-point game of his career (1-3-4), and Anthony Mantha had his first four-point game as a Capital (2-2-4).

On one level, the Caps had a good week defensively.  They allowed only 115 shots on goal (28.8 per game), and they allowed only 178 shot attempts at 5-on-5 (44.5 per game).  Their plus-33 in shot attempts at 5-on-5 when ahead suggested that they kept their foot on the gas pedal, but the Caps allowed far too many quality chances, especially in the second half of the week.

Here we are, 27 weeks into the season, and the number one goaltender situation is as murky as it was in Week 1.  Neither Ilya Samsonov nor Vitek Vanecek have been able to play with the consistency needed to inspire confidence they can shoulder the burden of being a number one goalie.   In Week 27, neither netminder broke .880 on the save percentage meter, Samsonov with a .850 save percentage in 90 minutes of work and Vanecek with a .880 save percentage in 148 minutes of ice time. The pair started games fairly well, posting a combined .929 first period save percentage over the four games.  But that number deteriorated in the second periods of games (.830) and third periods of games (.846).  Not that all results are the product of poor play in net; the Caps had adventures in defense in front of both goalies, especially Vanecek in the game against Montreal in which he had to be sharp early to keep a frisky Canadiens team from breaking out with a lead.

Getting four power play chances per game was a pleasant development.  It would have been nice if the conversion rate was equally pleasant.  It was not a bad week, and wanting more out of the power play seems a bit greedy given the 24 goals the Caps had for the week overall.  The Caps did face two top-ten penalty killing teams in Boston and Toronto, against whom they went a combined 0-for-6.  They also faced two bottom ten teams in Philadelphia and Montreal, against whom the Caps went a combined 3-for-10.  So, in that respect, the results might fall under the category of “expected.”

The odd part of the power play in Week 27 was where the goals came from.  T.J. Oshie, Justin Schultz, and Johan Larsson were the goal-getters, Schultz’ goal breaking a 38-game streak overall in which he failed to record a goal.  Schultz was also the only Capital to have a multi-power play point week, adding an assist to his goal.  Eight different Caps had power play points for the week. One would rather not have seen 13 shorthanded situations for the week, even a four-game week.  The total tied for most shorthanded situations faced in a single week this season for the Caps.  The difference, though, is that the Caps were just 8-for-13 in Week 15 (61.5 percent).  The performance continued a run of strong penalty killing for the Caps, who are now 68-for-77 (88.3 percent) over the last nine weeks.  The Caps allowed their power play goal against on a 4-on-3 advantage for the Philadelphia Flyers.  Nic Dowd, Trevor van Riemsdyk, and Nick Jensen being the penalty killers victimized. 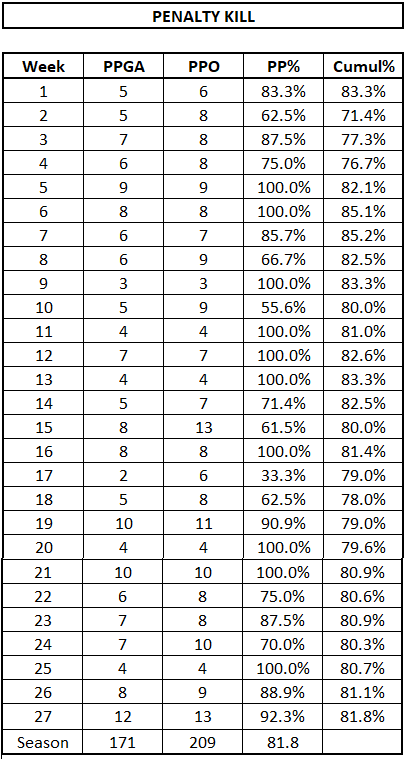 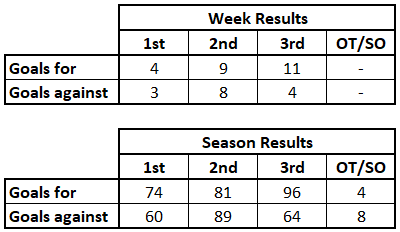 It certainly was an entertaining week for the Caps and their fans.  It was a throwback week to the run-and-gun 1980’s.  There were issues on the defensive side of the puck, but at this time of year, fans might be entitled to a bit of indulgence in a week of offensive fireworks.  So, we won’t dwell on the defensive matters…we’ll leave that to the coaches.