“The first step, my son, which one makes in the world, is the one on which depends the rest of our days.”
-- Voltaire

The Washington Capitals employed 11 rookie skaters this season, tying the number they skated in 2013-2014 and 2005-2006 and most since the Caps iced 14 rookie skaters in 2003-2004.  Axel Jonasson-Fjallby was one of the 11 rookie skaters the Caps dressed this season, and for a fifth-round draft pick (147th overall in 2016), it was a pretty good year.  He did not stand out in terms of offensive numbers, but he was given a range of responsibilities that will serve him well as his development continues. 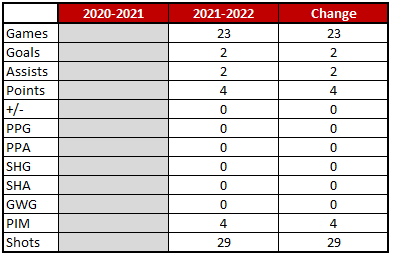 Fearless’ Take… You could call his numbers, for the most part, modest.  He ranked sixth of 11 Caps rookies in goals (two), sixth in points (four), fifth in shots on goal (29), fifth in credited hits (18), fifth in blocked shots (eight).  But there was one area in which he stood out a bit more – penalty killing.  “AJF” averaged 42 seconds per game in shorthanded ice time, second among rookie forwards (only two seconds per game less that Beck Malenstyn).  His offensive game might take some time to come around, but he already has been getting defensive responsibilities rookies do not often get.

Odd Jonsson-Fjallby Fact II… He is the third skater in Caps history with a hyphenated last name, joining Devante Smith-Pelly and Jean-Luc Grand-Pierre.

Odd Jonsson-Fjallby Fact III… Jonsson-Fjallby had two goals this season, both against the New York Islanders, one at home and one in New York.  Semyon Varlamov was the victim in goal for both.

When the Islanders came to town in mid-March, Anthony Mantha got the Caps off to a good start with the game’s first goal in the 13th minute of the first period.  The Isles would comeback with a pair of goals in the second period to take a 2-1 lead after 40 minutes.  In the 11th minute of the third period, Dmitry Orlov intercepted a pass in his own end and worked is way up ice, leaving a pair of Islander defenders in his wake to enter the offensive zone on a 2-on-1 with Jonsson-Fjallby.  He slid a pass past the stick of defenseman Ryan Pulock, setting up Jonsson-Fjallby for a one-timer that beat goalie Semyon Varlamov past his blocker on the short side for his first NHL goal, tying the game at 2-2.  The teams exchanged goals to push the game to extra time, where the Caps won, 4-3, in a Gimmick.


Game to Forget… April 29th at New York Rangers.  The last regular season game of the season for Jonsson-Fjallby and the Caps left a bad taste in his and their mouths.  For his part, Jonsson-Fjallby skated just 9:47 for the game, one of six games out of 23 he played that he logged less than ten minutes in ice time.  He had just one crooked mark on his line of the score sheet, a single shot attempt (shot on goal), and he finished a minus-2.  What was particularly odd about his game was not that he skated only 15 shifts, third fewest among the 18 skaters for the Caps, but that five of them ended in penalties, none of which were charged to him.

Postseason… Jonsson-Fjallby did not play in the postseason.

Looking Ahead… Jonsson-Fjallby is entering the final year of a two-year deal that carries a $750,000 cap hit in 2022-2023, after which he will be an arbitration-eligible restricted free agent.  Almost ten years younger and with a cap hit $2.0 million less than Carl Hagelin for next season, he is an attractive alternative to take over Hagelin’s spot on the fourth line, especially given Hagelin’s uncertain future after suffering an eye injury this season.  What makes his future more intriguing is that there is evidence his offense will improve.  In his last three seasons with Hershey in the AHL, he was 38-34-72 in 136 games, a 23-21-44 scoring pace per 82 games.  If he can make progress toward that level of production, and assume a regular role in penalty killing, he can do his part to keep the Caps’ fourth line productive.

Axel Jonsson-Fjallby took a bit of a detour before suiting up for the Caps.  Although he was drafted by the Caps, the big club put him on waivers for purposes of reassignment last October.  He was claimed by the Buffalo Sabres, but visa complications gummed up the transaction, and he returned to the Caps on a waiver claim a week after the Sabres claimed him.  He seems, for the moment at least, to have a home in DC, where he could assume a regular role for the Caps next season.  He could be quite a value addition for a player taken as a fifth-round draft pick.