“Great effort is required to arrest decay and restore vigor. One must exercise proper deliberation, plan carefully before making a move, and be alert in guarding against relapse following a renaissance.”

When the 2020-2021 season ended for the Caps, the question was less “if” than it was “when” center Evgeny Kuznetsov would be traded, right down to possible destinations.  We have to admit to being in the “when” camp back then.  That Kuznetsov was not traded is a lesson in why media (and bloggers) are not general managers of hockey teams.  After a disappointing season that extended a career arc of diminishing production since his star turn in the 2018 playoffs, Kuznetsov came into the 2021-2022 season appearing rejuvenated and committed to producing at a high level consistently. 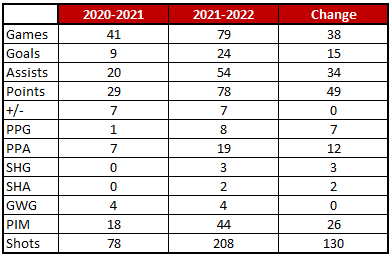 Odd Kuznetsov Fact… Only two forwards in the league (Jonathan Huberdeau and Adam Lowry) were on ice for most shorthanded points for than Kuznetsov (six).

Odd Kuznetsov Fact II… Kuznetsov had four game-winning goals this season, all of them on home ice.

Odd Kuznetsov Fact III… By now, Kunzetsov’s lack of faceoff success is not news, but while he won ten or more faceoffs in 12 games this season, the Caps were just 6-4-2 in those games.  He lost ten or more draws 25 times, and the Caps went 15-6-4.

Game to Remember… March 11th at Vancouver.  When the Caps visited Vancouver in March, they were wrapping up a three-game road trip to Canada’s western provinces. They split the first two games, a 5-4 win in Calgary and a 4-3 overtime loss in Edmonton.  For his part, Evgeny Kuznetsov entered the game against the Canucks with a four-game points streak (1-3-4), the Caps going 3-0-1 in those games.  Kuznetsov opened the scoring in the game’s sixth minute.  Kuznetsov started the scoring sequence when he took a pass from T.J. Oshie at the Vancouver blue line, skated through the left wing circle, and fired a shot that went wide into the right wing corner.  Nick Jensen recovered the puck along the right wing wall and sent the puck back around the end boards.  The puck struck a stanchion behind the Canucks’ net and popped out in front where Kuznetsov was skating through the low slot.  He batted the puck out of mid-air past goalie Thatcher Demko on the stick side, and the Caps had a 1-0 lead 5:34 into the game.  Less than a minute later, Kuznetsov and the Caps had their second goal, this one on a power play.  He took a slingshot pass from John Carlson in his own end and skated the puck to the Vancouver blue line, where he slid it to Carlson at the right point.  Carlson fed Alex Ovechkin for a one-timer from the left wing circle that Demko stopped, but could not control.  Kuznetsov was waiting at the top of the crease, and as he was being whacked by defenseman Tyler Myers, he pushed the puck the last couple of feet past Demko and into the back of the net to make it 2-0, Caps, at the 6:17 mark.  At the time, it was a bit of a mixed blessing, since Kuznetsov’s guiding the puck the last couple of feet denied what might have been Ovechkin’s 767th career goal, which would have broken a tie with Jaromir Jagr for third-place all time in career goals.

The Canucks came back, however, and took a 3-2 lead early in the third period.  The Caps drew even on another power play.  Carlson, Ovechkin, and Kuznetsov were engaged in a three-man passing drill at the perimeter of the offensive zone when Ovechkin snapped a shot that Demko once more stopped but failed to control. A scramble in front of Demko ensued, and the puck squirted out to his left.  Kuznetsov darted in from the right wing wall to jump on the loose puck, but his he whiffed on his first attempt to convert.  He did not miss on his second, using his superior hand-eye coordination to shoot the puck off Demko’s left pad as he was skating past the goal post, tucking it behind Demko to tie the game and complete his hat trick.  The Caps completed the comeback when Lars Eller scored just 42 seconds into overtime for a 4-3 victory.  For Kuznetsov, it was his second career hat trick and his fifth three-point game of the season.


Game to Forget… February 28th vs. Toronto.  The Caps closed out February with their first game in DC after a perfect 4-0-0 road trip.  They then laid an egg against the Maple Leafs on home ice.  The Leafs and Caps exchanged goals to start the game, but after the Caps tied it on a Conor Sheary goal 16:23 into the period, Toronto scored twice in a span of 1:09, the latter goal coming with just 1.6 seconds left in the period to take a 3-1 lead into the first intermission.  The Caps came back, though, scoring once in the second period and again, on a shorthanded goal by Tom Wilson 1:44 into the third period.  The Leafs would score late in a period again, though, taking the lead on a Rasmus Sandin goal with 3:23 left in regulation.  The Leafs added an empty net goal for a 5-3 win.  Kuznetsov had a brutal game, taking a pair of minor penalties, winning just five of 14 faceoffs, and going minus-4 for the only time in the regular season and the fourth time in his career he did so, his first time on home ice.

Looking Ahead… Kuznetsov has three years remaining on his contract that carries a $7.8 million annual cap hit. At the level of production he provided this season, that might be a bit of a bargain.  Of 12 centers with cap hits between $7.0 and $8.5 million this past season, Kuznetsov finished sixth in goals, second in assists, fourth in points, and second in average ice time (source: capfriendly.com)  But that’s the issue, will Kuznetsov continue producing at his 2021-2022 level, or was this season a one-off in what has been a disappointing trend in production?

By appearances, Kuznetsov had more focus and determination, and he just seemed happier playing hockey this season.  Having reached his 30th birthday and about to embark on his tenth NHL season in 2022-2023, he sits squarely in what should be the prime of his career.  For the Caps to keep that competitive window open just a bit longer, he is going to have to build off this year’s effort and play like a very talented player in his prime.