The Peerless Prognosticator is ON THE AIR!!! -- Game 29: Capitals at Blackhawks: December 15th

Hog Butcher for the World,
Tool Maker, Stacker of Wheat,
Player with Railroads and the Nation's Freight Handler;
Stormy, husky, brawling,
City of the Big Shoulders…

Chicago, in addition to the vivid description by Carl Sandberg, is also home of the deep-dish pizza, The Loop, Italian beef sandwiches, and iconic sports franchises, including the Chicago Blackhawks, who the Caps will face at United Center on Wednesday night.  The Caps head to the Windy City with an 8-3-1 record in their last dozen games, while Chicago has alternated wins and losses over their last dozen games (6-6-0).

The Blackhawks have struggled in the offensive end in those 12 games, averaging only 2.25 goals per game (tied for 27th over that period).  It is no surprise that Alex DeBrincat leads the team with six goals over those 12 games.  He is, after all, the team’s leading goal scorer this season (14).  The surprise is left-winger Brandon Hagel being next in line with four goals over the 12-game span.  Hagel was a sixth-round pick in the 2016 Entry Draft (159th overall) by Buffalo, who could not sign him to a contract and left him to re-enter the draft in 2018.  He was undrafted, but he did secure a tryout with the Montreal Canadiens. He failed to make the parent roster, and after his 2017-2018 season with the Red Deer Rebels in Canadian juniors, he signed a three-year deal with Chicago.  He appeared in one game for the Blackhawks in 2019-2020, and then he went 9-15-24 in 52 games last season.  He finished tied for 14th among rookies in goals scored, seventh in assists, and ninth in points.  He was one of three rookies last season with two overtime goals (Kirill Kaprizov and Cole Caulfield were the others). After a three-game goal streak in late November, he is 1-2-3, minus-3, in his last seven games.  Odd Hagel fact… he is 4-for-21 shooting (19.0 percent) both at home and on the road.  Hagel has faced the Caps once, without a point and with a minus-1 rating.

Seth Jones is expected to be the go-to guy on defense, and he has been that, leading the blueliners in goals (three), assists (20), points (23), and ice time (25:57).  Connor Murphy is a lesser known defenseman, but he trails only Jones in average ice time (21:55) and is tied for second in goals scored (two) among Chicago defensemen.  Murphy was a first round (20th overall) pick of the Phoenix Coyotes in 2011 and played four seasons in the desert, going 13-36-49, minus-30, in 258 games with the Coyotes.  After the 2016-2017 season, he was traded with Laurent Dauphin to Chicago for defenseman Niklas Hjalmarsson.  While a reliable double-digit point getter, that would seem to be Murphy’s ceiling, never having reached 20 points in his career (he had 19 for Chicago in 2019-2020).  What he has been is a bit injury prone in his career.  He has missed 44 games over four seasons with the Blackhawks prior to this one, his injuries including back (30 games in 2018), groin (12 games in 2019), hip (six games in 2021), and a concussion that cost him three games this season.  This season, Murphy finds himself with the worst goal differential, on ice, at even strength in his career (minus-11).  He is 1-1-2, plus-4, in 11 career games against Washington.

Chicago has employed six rookie skaters this season.  With Mike Hardman, the rookie leader in games played (19) reassigned to the AHL and Reese Johnson (18 games) laid up with a broken clavicle. Right winger MacKenzie Entwistle, who was called up from the AHL, is now the active team leader among Chicago rookies in games played (12).  He might have a name that sounds like a minor character in Downton Abbey, but he was a third-round draft pick (69th overall) in 2017 by the Arizona Coyotes.  He never played for the Coyotes before being traded to Chicago with a fifth-round draft pick in 2019, Jordan Maletta, Andrew Campbell and Marcus Kruger for a third- round draft pick in 2019, Vinnie Hinostroza, Marián Hossa and Jordan Oesterle.  Got that?  Entwistle skated five games for the Blackhawks last season in his first NHL action, finishing with a 1-1-2, plus-1 scoring line in five games.  After posting a goal and a minus-4 rating in his first nine games this season, he is 1-1-2, even, in his last three games with the big club.  If he gets a sweater, this would be Entwistle’s first action against the Caps. 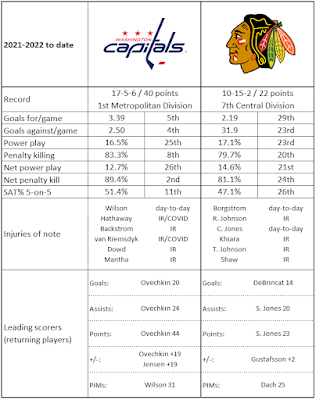 1.  Five of Chicago’s ten wins this season have come in extra time (two in overtime, three in the Gimmick).

5. Only Pittsburgh and Calgary have fewer wins when allowing the first goal on home ice (neither has won such a game) than Chicago (one win in six instances).

1. The Caps have allowed 18 goals in their last three visits to Chicago, losing decisions by 7-1 and 8-5 margins before winning, 5-3, in their last visit.

2.  Trevor van Riemsdyk is the only one of 20 Capital skaters to appear in 10 or more games who does not yet have a goal.

5.  Washington is a top-ten team in the league in fewest goals allowed in the first period (eight goals/tied for sixth-fewest), second period (13/tied for seventh), and third period (11/tied for fifth).

While he has come back to appear in all 27 games to date for the Blackhawks this season, that comeback has been a struggle.  He did not score a goal in his first 25 games and had a minus-14 rating.  He has, however, posted a goal in each of his last two games (on a total of three shots).

One other area that seems to have suffered with Toews absence last season is defense.  In 13 seasons before this one, Toews received at least one Selke Trophy vote for best defensive forward in 12 of them (each of the last 12 seasons), was finalist for the trophy in four of them, and won the trophy in 2013. But this season he has been on ice for 22 even strength goals and is on a pace to be on ice for 66 goals at evens, which would be the third-highest total of his career.  He has a minus-11 goal differential at even strength that is, to date, the only “minus” differential of his career since the NHL started capturing this statistic in 2009-2010.  Toews is also a team-worst minus-13.  No doubt part of this is a general weakness on defense for the Blackhawks (3.19 goals allowed per game/23rd in the league), but Toews would appear to have some catching up to do in the defensive end as well.  He is 10-9-19, minus-2, in 17 career games against the Caps.

Carlson even ranks tied for tenth in goal differential, on ice, among defensemen at even strength (plus-10), a bit surprising given the reputation attached to his play in the defensive end.  And speaking of that, the 21 goals against that he has been on ice for at evens is tied for 52nd most in the league, fewer than Dougie Hamilton (25), Roman Josi (25), Seth Jones (28), Alex Pietrangelo (30), and Victor Hedman (31), among others.  One would not call this Carlson’s best season (yet), but it is squarely in line with his performance over the last four-plus seasons.  It is his fifth consecutive season averaging more than two points per 60 minutes, his fifth consecutive season averaging at least 1.5 assists per 60 minutes, his fifth consecutive season averaging at least 0.4 goals per 60 minutes.  Carlson is 3-8-11, plus-5, in 16 career games against Chicago.

Fierce as a dog with tongue lapping for action, cunning as a savage pitted against the wilderness,

Chicago is still “rebuilding,” but they are making progress, and the Capitals need to be mindful of that.  With three full days off since they defeated Buffalo last weekend, the Caps will either be bright eyed and bushy tailed or rusty.  It makes the game’s opening minutes something to pay attention to closely.